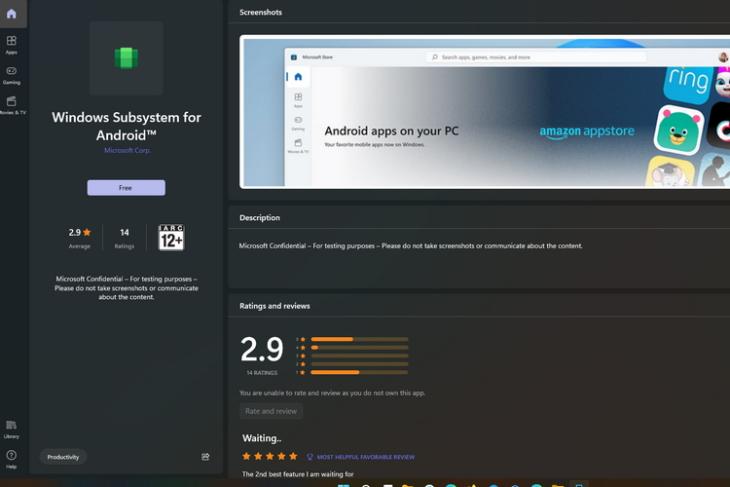 One of the key highlights when Microsoft unveiled Windows 11 earlier this year was support for Android apps via the Microsoft Store. The feature is in partnership with Amazon as Microsoft essentially enables you to install Android apps from Amazon Appstore. However, as the Redmond giant revealed in its recent Windows 11 release date announcement, you won’t get Android support at launch in October. Now, a listing for Windows Subsystem for Android has popped up on Microsoft Store, suggesting an imminent beta test for Insiders.

As spotted by Windows tipster WalkingCat, the listing is just a placeholder at the moment. Installing the app brings up a blank screen. “Microsoft Confidential – For testing purposes – Please do not take screenshots or communicate about the content,” reads the description. As you are reading this, it’s safe to say no one took that warning seriously.

Coming to system requirements, the minimum OS requirement for Windows Subsystem for Android is listed as Windows 10 version 22000.63 or higher. However, this is likely a mistake as the 22000 series is used for Windows 11. Notably, a previous version of the listing mentioned Xbox One as well. But that has since been removed, presumably due to speculations of Android apps on Xbox. Other requirements include ARM64 or x64 architecture and 8/16GB RAM.

While the delay for Android apps on Windows 11 might come as a disappointment to users, we could expect Microsoft to roll out a preview build of Windows 11 with Android apps support on Insider Dev or Beta channels in the coming months. Until then, you can continue using Android emulators for Windows to run your favorite Android apps on a Windows PC. We even have a detailed guide on how to install and run Battlegrounds Mobile India (BGMI) on a PC.