We all use WiFi at our homes and offices and most of us are familiar with the moniker 2.4 GHz and 5 GHz frequency bands. In fact, all the connected devices that we buy today including our smartphones, tablets, and more, mention as to which frequency bands they support. That said, not many people know the difference between these frequency bands and that has led to a lot of confusion. Well, we will try to eradicate that confusion in this article as we explain everything that you need to know about the 5 GHz network to see what makes it different from the 2.4 GHz and is it any better:

Before we get to understand the 5 GHz network, first, we have to understand how WiFi works. Just like mobile networks, WiFi networks use radio waves to transfer data across the network. While radio waves cover a big frequency range (~3 KHz to 300 GHz), the main frequency range used for commercial WiFi purposes are the 2.4 GHz (2.4 to 2.5 GHz) band and 5 GHz (5.180 GHz to 5.825 GHz) band. When the first WiFi bands were made available for public use, an organization called IEEE (The Institute of Electrical and Electronics Engineers) set up a new committee called the “IEEE 802” which released a set of standards called the “802.11” for implementing wireless local area network (WLAN) computer communication in the 2.4 and 5 GHz frequency bands. 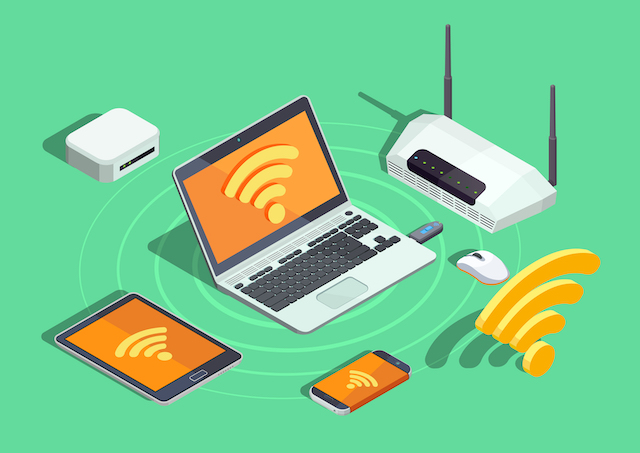 That’s why, when you see the WLAN certification on your device, it reads 802.11 followed by any or all of the following letters; a/b/g/n/ac. Don’t get confused by the letters as they only signify the next standard in WLAN technology. The 802.11 was the first standard that was followed by the 802.11a which was followed by the 802.11b, and so on. That said these letters do suggest as to which frequency band your device can operate in. The 802.11 b/g/n devices can receive signals that are transmitted using the 2.4 GHz band while the 802.11 a/n/ac uses 5 GHz band.

What is 5 GHz WiFi Network?

Now that you have a little background knowledge of the origins of WiFi, you are ready to understand the 5 GHz WiFi network. As it is apparent from the above section, the 5 GHz WiFi network uses radio waves between the frequency of 5.180 GHz and 5.825 GHz. For your device to be able to receive these signals, it should be certified by the WLAN 802.11 a/n/ac standard. The 5 GHz band is further divided into 24 different channels each being 20 MHz wide. Channels are very important as at any given time, your device can only use one channel, but more on that later . Now let’s see if and why 5 GHz network is better than the 2.4 GHz network.

The main reason 2.4 GHz network is slower is because of two main reasons; channels and bandwidth. As a rule of thumb, the 802.11 RF modulation techniques require about 20 MHz in channel width to operate. Since the 2.4 GHz band has 13 channels which are only 5 MHz apart, there is significant overlap and interference between the channels. Also, the fact that 2.4 GHz channel is not only used by WiFi networks but also other types of networks such as Bluetooth, security camera, and even microwave, the 2.4 GHz band is already too crowded and has only a limited bandwidth to offer.

Due to the above two reasons, the 2.4 GHz band suffers a lot of interference. The impact of this interference can cause anything between lower data speeds to a complete signal loss depending on the nature and severity of interference. I don’t want to bore you with the technical stuff, so the thing that you should know is that RF channels are a shared medium. So, all the devices using the same channel as your access point will be using the same bandwidth. Seeing how 2.4 GHz network is the used by almost every smart device, that bandwidth is low to begin with. Add that to the fact that in the 2.4 GHz band, the channels overlap with each other, which causes the devices which are not even in your channel to use the same bandwidth which in turn also impedes your network. 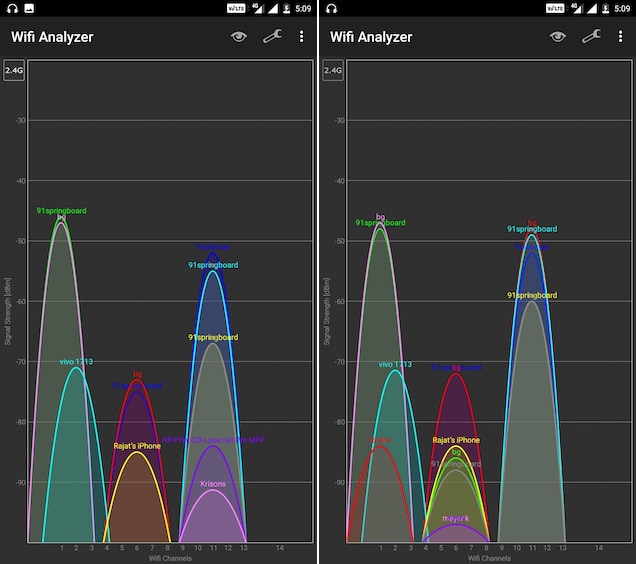 Although the 5 GHz network doesn’t suffer from the same problems that we have discussed till now, it has its own fair share of problems. The biggest problem of using a 5 GHz network is that it cannot travel far and is easily impeded by structures such as walls, doors, and other physical hurdles around it. What that means is that for getting the best speed possible, you should be direct in the line-of-sight of your router. That’s why if you are using a single router in your home, and your room doesn’t have its own router, the signal that you receive in your room will be far weaker on a 5 GHz network than what you would get if you are using the 2.4 GHz network.

As you can see, although 5 GHz network suffers from a few problems itself, its pros far outweigh its cons. If you want your devices to get the best internet speed in the future, you should only buy the ones which support 5 GHz WiFi Network. We have attached the list of all the phones released in the past two years which support 5 GHz WiFi Network to help you find out if your device supports it or not:

5 GHz WiFi network is nothing new. In fact, it was ratified in the September of 1999 along with the 2.4 GHz network. That said, since the deployment of 2.4 GHz network was easier and cost-effective, it quickly became the universally adopted WiFi network while the 5 GHz band took a backseat. Now that the 2.4 GHz frequency band is overused and is causing a lot of connection problems, people are turning towards the 5 GHz network which has been sitting empty for almost two decades. To conclude, the 5 GHz network is nothing revolutionary, however, it is something that we need to adopt if we are to solve our WiFi connectivity problems.

I hope that I was able to explain the 5 GHz WiFi network in a way that was understandable.  Do keep in mind that I  have simplified some of the technical topics to make this article more reader friendly.  If you still cannot grasp this or have any doubts, ask your questions in the comments section below and I will try my best to answer them as soon as possible.