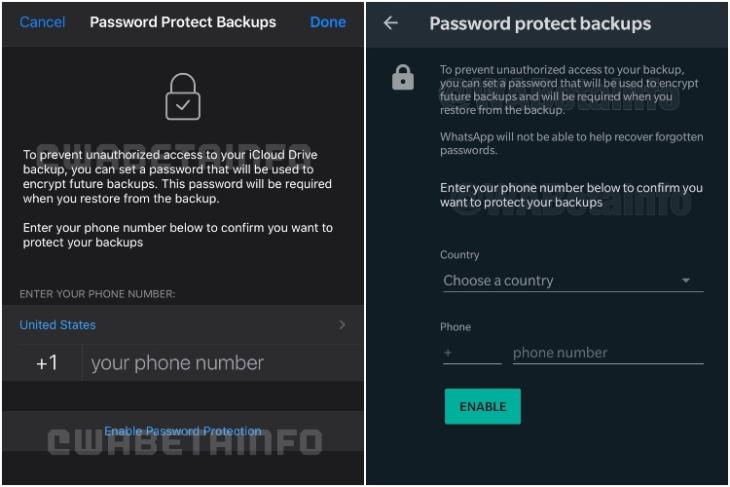 After rolling out voice and video call support for its desktop and web apps, WhatsApp is now aiming to add encryption to cloud backups. This means users will get the option to set an encrypted password for cloud backups. This will prevent unauthorized access to their chats and media.

The report comes from WABetaInfo (@WABetaInfo), who recently shared a tweet with screenshots showcasing the feature. You can check out the tweet below.

As previously announced, @WhatsApp is working on cloud backups encryption.

The chat database and media will be safe from unauthorized access when using a password. The password is private and it's not sent to WhatsApp.
It will be available in a future build for iOS and Android. pic.twitter.com/Lp06PaECBX

The feature dubbed “Password Protect Backups” will allow users to set a password for their chat and media backups. This password will be used to encrypt any future backups made on the app. Currently, if you are unaware, your WhatsApp cloud data backup (be it on Google Drive or iCloud) is not end-to-end encrypted. This can be seen as a major privacy issue and the password-protected feature sounds amazing for added security.

Now, once a user sets a password for backups, it will protect one’s chats and media files that have been already backed up on the cloud. Moreover, users will be required to provide the password at the time of restoring a backup from the cloud platform.

Furthermore, it is worth mentioning that the backup passwords are not shared with WhatsApp. As a result, if a user forgets his/her password at the time of restoring backups, then there is no way WhatsApp can help recover the password.

As per WABetaInfo, the company is currently testing the feature. It will be rolled out to users with future builds of the app. And, the feature will be available for both iOS and Android users.