The all new Vivo V11 Pro (Rs. 25,990), which was recently launched in the country at an event in Mumbai, offers a ton of premium features in the mid-range price segment that have been previously limited to flagship devices. Among these features is the Vivo V11 Pro’s brilliant 6.41-inch Super AMOLED display, its waterdrop-style notch, its in-display fingerprint scanner and its infrared-assisted face access.

Here, we’ll be talking about the device’s face access capabilities, highlighting where the mechanism excels, when compared to other devices in this price range, and where it falls short. While I wouldn’t expect the Vivo V11 Pro’s face access feature to be as secure as the iPhone X’s face unlock, the addition of an IR sensor greatly improves its security standards and even helps it work in the dark.

Most budget and mid-range devices these days offer a face unlock feature, however, the Vivo V11 Pro’s IR-assisted face access feature is significantly better than that of other devices that don’t feature an IR sensor. What differentiates the two is that along with the photo-based face unlock solution used by most other manufacturers, including flagships like the OnePlus 6, the IR sensor on the Vivo V11 Pro captures up to 1000 unique points on the user’s face to further secure the face access authentication. This results in face unlocking capabilities that are just as fast, if not faster, and more secure than that of the OnePlus 6. 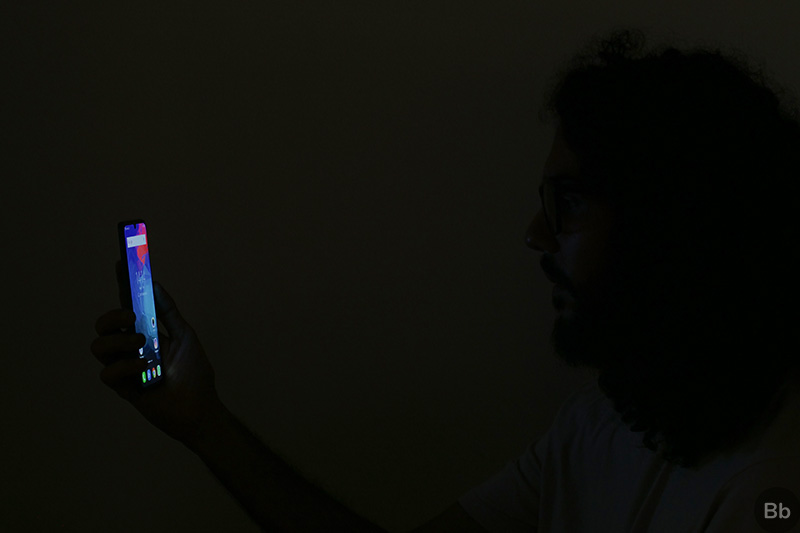 Since the Vivo V11 Pro’s face access feature illuminates the user’s face with a flood of IR light, the feature even works in the dark, something that other devices with photo-based face unlock can’t do. Even when it’s pitch black, the Vivo V11 Pro’s face access feature works as fast as it would work in bright sunlight. I’ve extensively tested the feature in almost all environments and I can confirm that it works every time.

In conclusion I’d like to commend Vivo on including such a great feature on the Vivo V11 Pro, which easily meets the benchmark set by OnePlus devices when it comes to speed and exceeds them when it comes to security standards. So, if you’re in the market for a mid-range device that features speedy and secure face unlock capabilities, then you should definitely consider the Vivo V11 Pro.