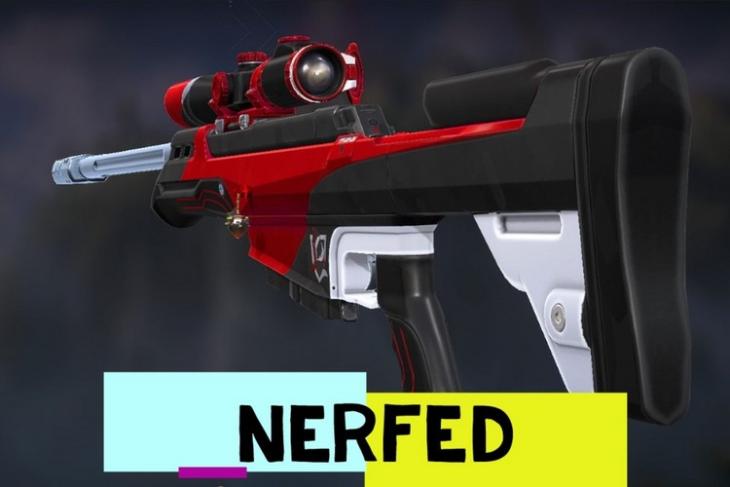 If you thought Riot was done with their massive nerfs for Valorant, then I am sorry to break it to you that you are mistaken. On 30th September, Riot rolled out a new patch that includes a major nerf of, arguably, the most powerful gun in the game.

Now, the Operator (or simply called the OP) is, no doubt, the most powerful weapon in Valorant. Since the launch of the FPS video game, players have been abusing this gun’s massive damage-dealing ability to get some crazy kills. Hell, I, being a noob, got an ace with the gun.

So now, with its latest patch, the developers have added some major nerfs to tame this beast. Riot says, “The Operator serves an important role in VALORANT: It provides the most difficult tactical challenge for teams to overcome, requiring strategic planning and clever utility use. We’ve been taking a long look at the weapon to try to understand the best way to adjust some of its outsized strengths while ensuring it remains the most powerful angle-holding weapon in the arsenal.”

So before I go on to say what I feel about this particular nerf, here are the updates.

Yes, the nerfs are pretty strong for the gun, for sure. However, it is still the most powerful bad boy in the game right now. If you manage to get that sweet headshot, it’ll still deal a whopping 255 damage and get you a satisfying kill. “The Operator is still quite potent at peeking angles but predictable re-peeks should be easier to punish,” adds Riot.

Nonetheless, the increased price of this gun surely makes it one hard-to-get gun in the game. So, do keep in mind that now you have to save a bit more in order to accumulate 5000 credits, which is the new price of the gun.

Moreover, there are also some pretty significant updates for the “agents” included in this patch so let’s check them out:

The shadow hunter’s “Paranoia” got an updated VFX to better represent its hitbox when it is traveling in your POV. Riot says, as a first step they wanted to resolve visual issues where players hit with paranoia appear outside of its impact on their screen.

Jett’s ultimate ability is really tough to master but once you do, nothing can beat her agility. This time around her ultimate, “Blade Storm” sees some major changes.

The time between consecutive burst fire use has been increased from 0.33 seconds to 0.45 seconds. The daggers thrown in the burst will now have damage fall off that begins at 12 meters and drops consistently to 35 damage at max falloff. Moreover, the developers reduced the headshot multiplier on burst fire from 3x to 2x.

Riot specifically brought so many changes in the burst fire because burst was over performing in long-range. So, these updates will help players focus more on the close range with burst fire.

Viper was definitely a powerful agent and yet not the most played one. This is probably why Riot decided to buff her abilities.

Viper’s fuel which is also known as the “toxin” is now increased from 50 to 100 at the start of the round. “Snakebite” now lingers for 2 seconds after leaving Viper’s acid. Her speed has also been doubled when she has her ult on. On top of these, she can now re-equip a gun faster than before when inside the Viper’s Pit.

This time Reyna has been through the least of changes. For her, it’s just the fire rate that went from 25% to 15%. However, this only applies when she is in the “Empress mode”, which is her ultimate ability.

Unlike Reyna, Brimstone’s only update is good news for the agent. With this new update, Riot buffed Brim’s “Stim Beacon”. Previously, when inside the beacon, agents fired at 10% increased speed. Now, every agent inside it will fire at a 15% increased rate.

So, these are some of the major changes that were brought in by Riot with its latest 1.09 patch update in Valorant.