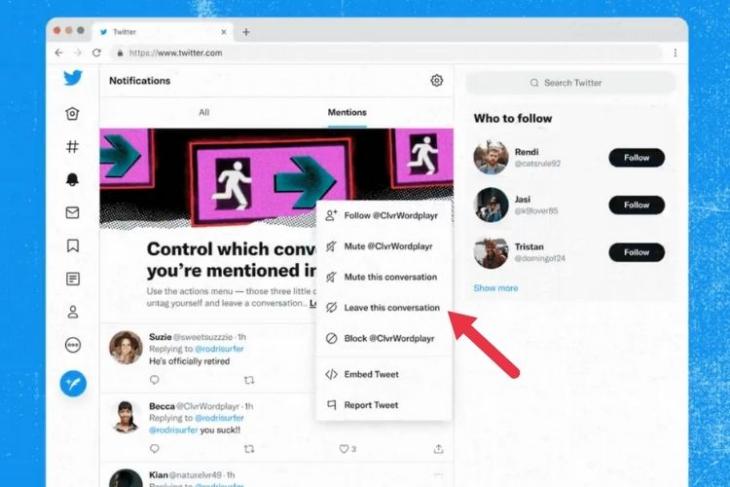 Twitter is rolling out a new feature, which will let you “unmention” yourself from unwanted conversations on the microblogging platform. The Unmentioning feature is currently available as a test, and much like most Twitter test features, it is available for a select few on its web platform. Here are the details.

Twitter Will Let You Leave a Conversation When Needed

Twitter announced the feature via a recent tweet, which also includes a GIF to showcase how the feature works. If you are ever mentioned in a Twitter conversation and you want to get out of it either because it’s unwanted or turning ugly, you can click the three-dotted menu in the top right corner of a reply and select the “Leave this conversation” option.

An additional menu will surface to tell you more about the feature, and you can once again tap the same option to finally “untag” yourself from a reply. Here’s a look.

Further information suggests that once you have unmentioned yourself, your name will be untagged from the conversation, you won’t be tagged in that conversation again, and you won’t get any notifications too.

This feature is similar to how you can remove yourself from a tagged post on Facebook and can help you big time when things can get toxic (which happens more often than not) on the platform.

Since it is currently being tested for some users, it remains to be seen if Twitter makes it an official feature for all. Meanwhile, the company has recently confirmed that it will soon start testing the Edit button, which has been a much-requested feature for years.

So, what do you think about the new “unmentioning” feature on Twitter? Do, you think it can really help you maintain your peace? Let us know your thoughts on this in the comments below!