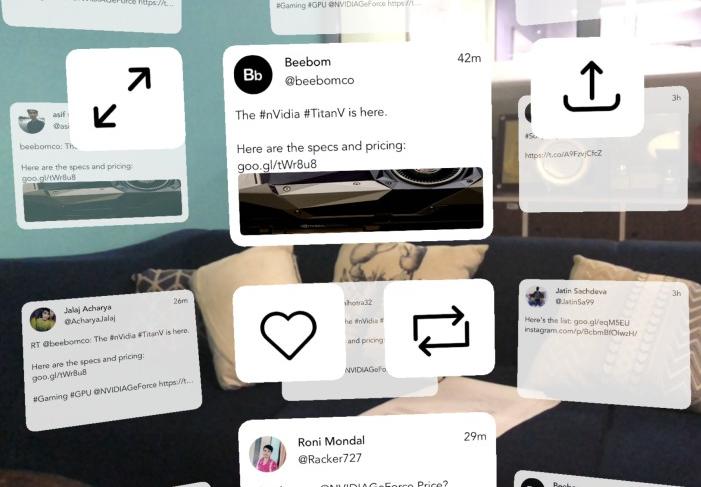 Ever since the launch of Apple’s ARKit suite, the development of augmented reality apps has taken off and developers are toying with different concepts to make new interactive experiences available to consumers. But, if you’ve ever wondered how social interactions will eventually look in the augmented reality space, then you’re in luck. An iOS developer has launched the first-ever AR client for Twitter called TweetReality.

The AR experience of Twitter has been envisioned and developed by Oscar Falmer, with the use of ARKit over the past three months. The TweetReality app puts all of your tweets, mentions, profile, and other major features in the real world. It ports the Twitter feed to your surroundings but not in a similar vertical scrolling format but instead, it has now been converted into a grid of interactive cards. 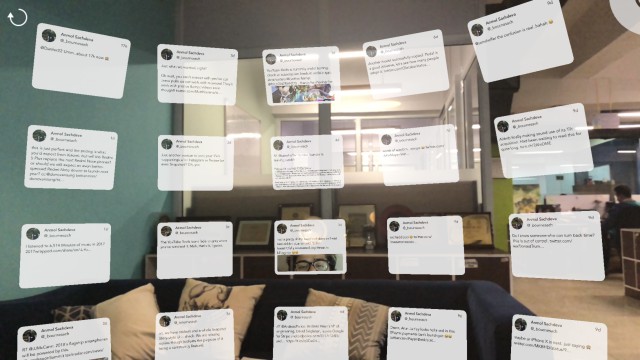 When you first open TweetReality, you’re asked to authenticate your Twitter account and then scan the floor to get an idea of the 3D plane. Once the floor scanning is done, you’re asked to look up to see your Twitter feed in the real world. You can also walk closer to the floating tweets to zoom in and read the tweets in a better manner. You can even use a VR headset to see the feed in a 3D plane, making it even fun to experience the platform.

The TweetReality app was released for both iPhones and iPad a couple days ago and has received a positive response from the users who’ve tried the app. I was genuinely excited to try out the app and it was quite amusing to see the tweets float around me. It does need a bit of polish to improve the intuitiveness and interactivity of the app.

It was really cool to see my tweets float around me but it reminded me of an episode from Netflix’s Black Mirror TV series, where all your actions are judged and add up to your social standing. Every person wears AR contacts lenses in that dystopian world and can view your social score, posts in real-time. The experience was kind of similar but I still had to use my iPhone 8 to see my Twitter feed on the wall in front of me.

With the invention of smart glasses and contact lenses, augmented reality is bound to gain prominence in our daily lives over the coming years. This will lead to most of our Internet platforms, even Twitter, to be available right in front of our eyes rather than a small screen in our hands. So, do you plan on trying out the first AR client for Twitter? Let us know your experience in the comments down below.