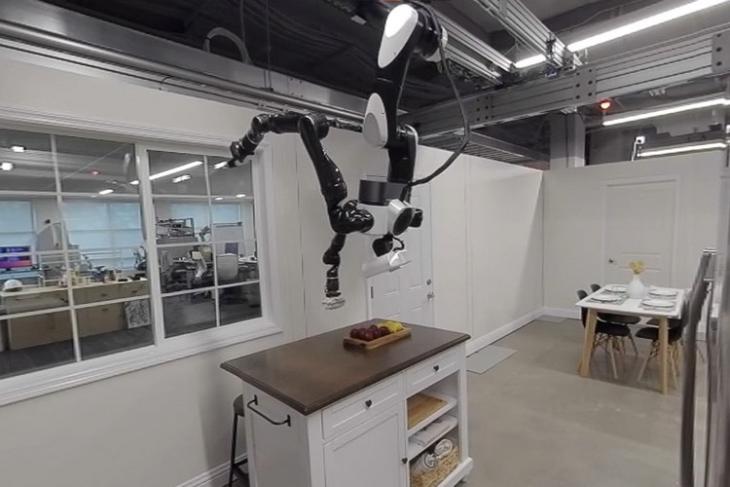 With an aim to ease the daily life of the elderly population, Toyota’s robotics division at the Toyota Research Institute (TRI) has developed a unique robot to handle house chores. We have already seen the company develop a helper robot last year. Now, the new Toyota “Ceiling-Assistant” will hang from the, of course, ceiling and will be able to clean dishes and do other simple house chores.

One of the reasons the Japan-based automobile-maker was inspired to build the said ceiling robot is the Japanese notion of Ikigai, which means every person’s life should have meaning and purpose. So, as the global population above the age of 65 is said to double in the next three decades, according to the UN, Toyota aims to aid this graying population with its robotic technologies.

Now, coming to the ceiling-robot, Toyota says that it uses artificial intelligence (AI) to enhance human abilities. A “human-centered approach turns typical AI philosophy on its head: instead of replacing human beings,” adds the company.

One of the major benefits of the ceiling-assistant robot, compared to ground robots, is the management of space in a house. As it uses the floor above, that is the ceiling of a house, the ground remains clear for the children and the pets to freely roam around. Also, when not needed, users can easily tuck it away into the ceiling to better manage home space.

The company, as we know, visualizes a future with smart homes integrated with many different kinds of robots. So, the company thinks that these new ceiling robots will already be there inside the smart homes of future cities. Toyota showcased the robot in an online presentation recently. You can check out the video right here:

Now, although there are a lot of benefits to this new robot, there also are some major drawbacks. For instance, the company uses virtual reality to train the robot. This means a human operator performs the featured actions physically using a VR kit and those movements get stored in the robot’s memory. Hence, these ceiling-bots aren’t very smart.

Moreover, the fact that every home has a distinct design-language, mastering each of the environment of the homes will be a major challenge for the robot.

Toyota to Invest $500Mn in Uber in Self-Driving Car Deal