Overheating seems like a fairly common problem with Android smartphones these days but not a lot of people know what to do about it. It is no rocket science why devices heat up, it is mainly because of the way it is being used or to be fair, “overused” is the right word for it. We may be overusing our Android device knowingly, playing games on it all the time but it also happens unknowingly. Apart from the fact that the device gets tough to hold, overheating also causes damage to the device itself. What is absolutely irritating is when your phone turns into a heated cannon ball and you have no idea what you did to get it boiling like that.

While we do agree that overheating is nothing new and happens to the best of devices, we believe there are some things you can do to prevent it from happening and protect your device. You can start by following these few simple tricks and feel the difference for yourself:

1. Avoid running too many apps in the background

Let’s start with something that may not come to your notice right away because apps running in the background is something that majority of us tend to ignore. With the huge amount of RAM in recent Android smartphones, apps run smoothly even when you have a number of active background apps. However, these background apps & services take up CPU resources, thus putting a strain and heating the hardware.

Well, if you want to turn the heat down on your device you might want to look into the number of apps you have running in the background and try and limit this in the future. Just make sure to exit the apps after you are done using it and restrict auto-start if your device allows such controls. You can also check the RAM used by apps in Settings->Memory. 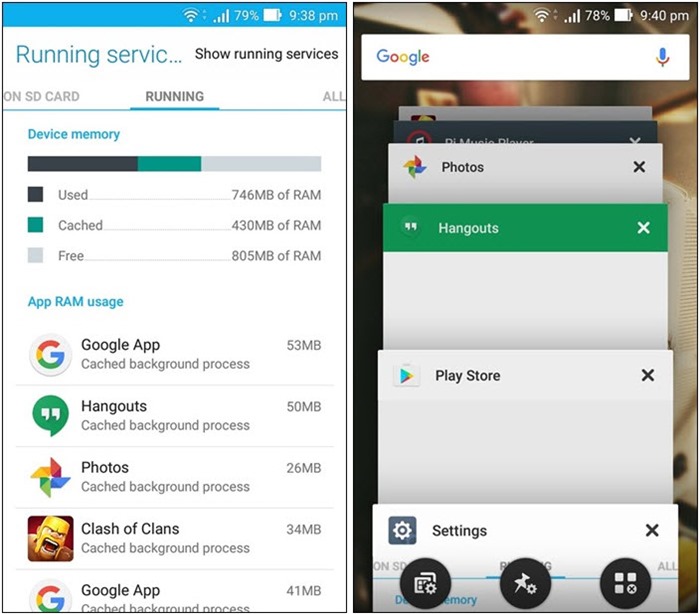 If you use apps like WhatsApp or Facebook Messenger etc. continuously, your device won’t overheat, however playing games or using the camera will. Add Virtual Reality to that list and you have the trio that is capable of boiling your device.

Games are not like other apps, they are intensive on the resources and put more stress on your CPU, as well as the battery. The same goes for the camera, as keeping it active to capture long duration videos or time lapse videos requires additional power from both the CPU and battery, resulting in your device heating up. VR is the latest addition to the things that take a toll on your device. Using your device with a VR gear might seem cool, but doing it over long periods of time will cause some serious heating, so try and cut back on that as well.

3. Cut back on mobile data, Bluetooth and GPS usage

It is no secret that services like Bluetooth, mobile data and GPS take a toll on your device’s battery. But what people don’t pay attention to is, how and why this happens. These services drain out your battery fast because they require a lot of power to work. Do the math and you will find out that the faster the battery drains, the hotter the device gets. 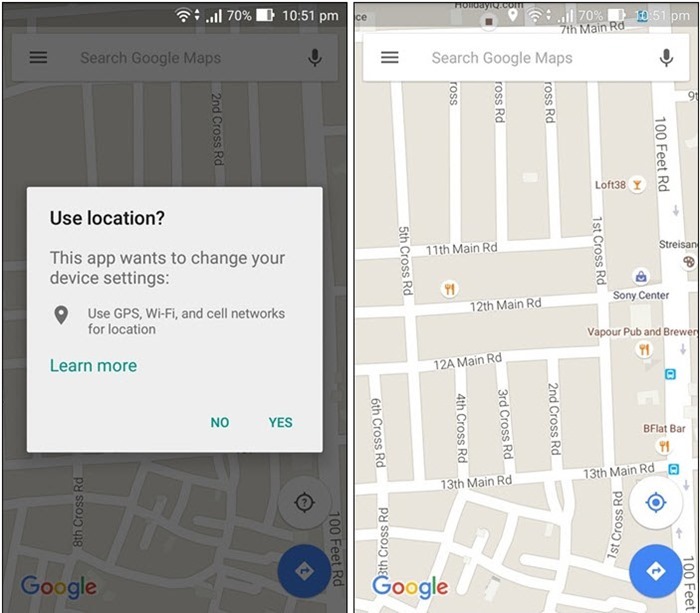 If the battery is being overused, it has to provide the device with more power to sustain these wireless services and doing that continuously for a decent amount of time undeniably shoots its temperature up. Using Google Maps and other similar applications too heats up device, as it requires the GPS and the screen to remain active for long duration. Along with these services, WiFi too tends to use up battery but compared to mobile data, it’s a lot more power efficient.

Charging properly, two words that you should never get out of your consciousness. If you want your device to stay cool and also maintain its battery life, you should make sure to charge it properly. This involves a few basic things, that if followed will make sure to significantly decrease your device’s heating issues.

5. Keep the Brightness in check 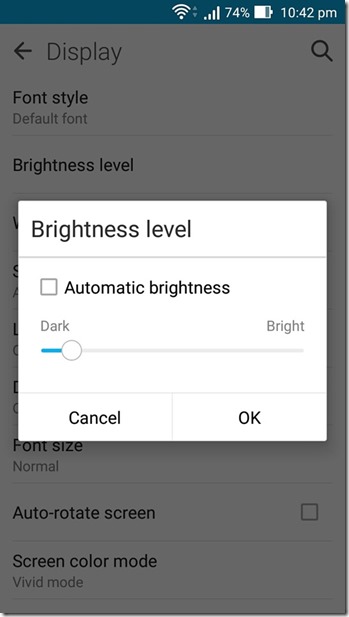 Investing in a good case for your phone should be the first thing to do after you get a brand new Android smartphone. A good case is important for your device’s physical protection and also its temperature. Instead of buying a leather case or a bulky one, you should buy a case which will ensure that your device gets the air it needs to remain cool. Leather tends to trap the heat inside and so do many other similar materials. Invest in a good quality hard shell or rubber case, which will give your device a cooler look while keeping it cool.

You may not realize this but apps aren’t the only thing that use your device’s resources, viruses and malware do this as well. These notorious apps will keep consuming resources in the background and much like background apps, these too will prevent your device from taking a break. Such continuous usage of resources is bound to make the CPU as well as the battery hot. 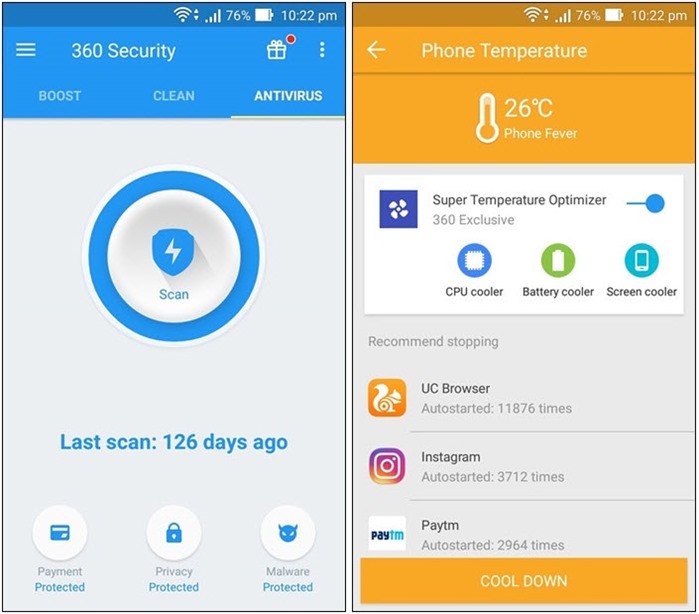 Install a good anti-malware app to make sure your device is safe and does not have viruses keeping it hot. We recommend the app 360 Security for this purpose, as it is a decent anti-malware app, which can also monitor your device’s RAM usage and temperature among other things.

8. Install an app to monitor and cool down your device’s temperature

With overheating being such a common issue with most Android users, the Play Store is filled with apps that monitor and control the device’s temperature. These apps monitor your device’s temperature in real time and have one tap features to cool down a device. We recommend using the CPU Cooler app, which keeps a check on the apps that are overusing your CPU and heating it up. This app also features a one tap feature capable of closing all such resource-consuming apps to allow the device to cool down. 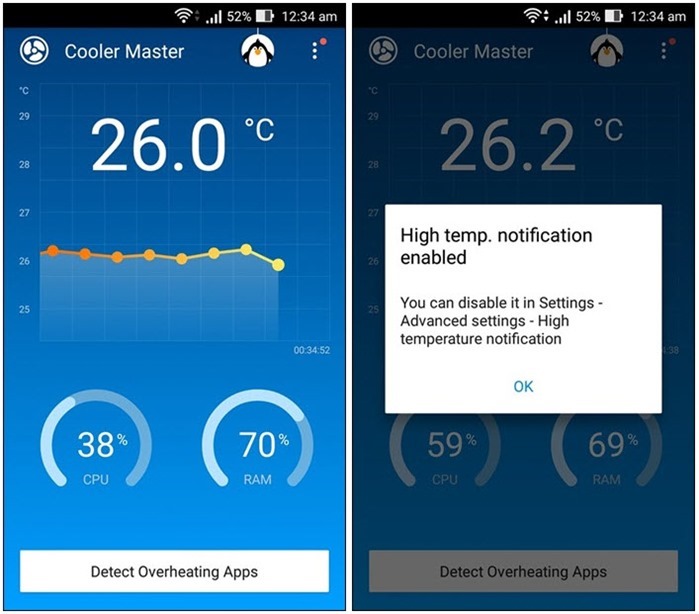 Some Additional Points To Remember

Apart from the above-mentioned points, you should also keep these two tips in mind:

1) Avoid keeping the device under direct sunlight, as this will gradually raise its temperature.

2) Avoid using or charging the device after it has been in contact with water, even if your device comes with water resistant capabilities.

So there it is, a few things to keep in mind to make a major difference in your device’s temperature. These tips, though simple, will ensure that you don’t have to face overheating issues on a regular basis. If your device is still heating up a lot you may want to take it to a service center as this may be because of poor battery life or some other hardware problem. Apart from that, these small changes will most certainly prevent regular overheating. Overheating may seem like your phone’s way of telling you to slow down when you are using it too much, but that should be occasional. Make sure to follow these tips and treat your device with care and in return, it will keep calm and cool for you.