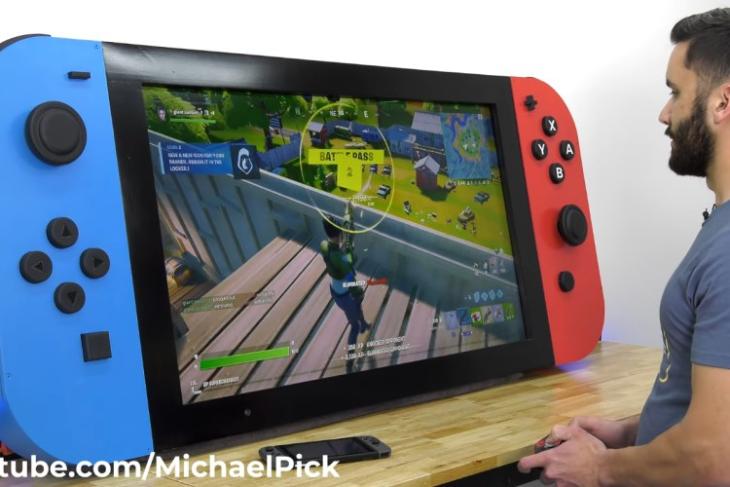 A YouTuber by the name, Michael Pick, decided to solve a problem he faces with his Nintendo Switch, which he says is “really easy to lose”. So he fixed it by making a Nintendo Switch that is indeed very hard to miss.

The result? Well, Pick built the world’s largest Nintendo Switch which, by the way, is fully functional. The console is 650 times any standard Nintendo Switch console and is 30-inch tall and 70-inch wide. Moreover, it weighs 65 pounds (29.5kg), taking away the portability factor from this massive console.

You can check out the video where Pick builds the device and explains how it works right below.

How Does This Giant Nintendo Switch Work?

Hence, every single button works, even the side triggers. The giant Switch also features a 4K LED display, as it is actually the shell of a 4K LED TV. So, imagine playing games like Apex Legends and the upcoming Fall Guys on such a display.

The creator mainly used wood and 3D printed materials to make this giant device. Even though it’s playable, I don’t think it’s feasible which is why you can also use a regular-sized Nintendo Switch Pro Controller for playing.

Now, Pick did not build the giant Switch for himself. Instead, he made the device for the Monroe Carell Jr. Children Hospital in Vanderbilt. The hospital told Pick that they intend to install the device in one of their playrooms and the children will most likely be using wireless controllers to play on the console.

Besides, this wasn’t Pick’s first project. He has previously tried his hands at creations that are smaller in scales like the world’s smallest Macbook Pro, iMac, and Gaming PC. Furthermore, he gives us a hint on his upcoming project which will be a Guinness World Record attempt based on a “very iconic children’s toy”.

This YouTuber Turned a Xiaomi Mi 9 from 2019 into a Full-Fledged Gaming Smartphone!

This YouTuber Built a ‘Magic Wand’ to Turn On Lights, Home Appliances