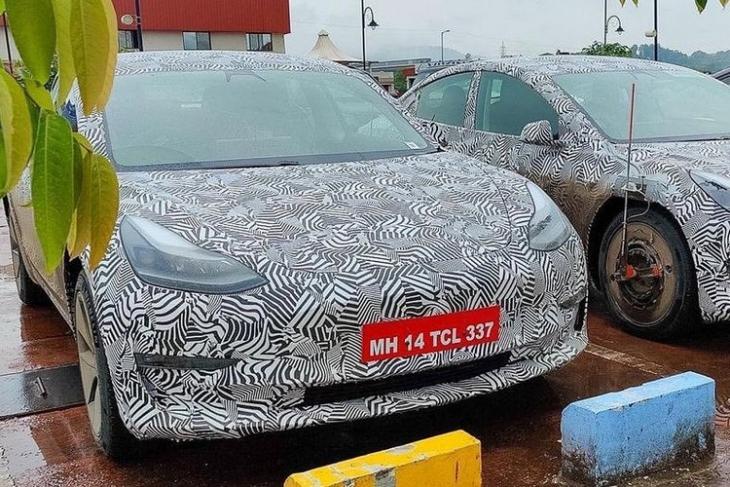 After getting spotted in Pune a couple of months back, two Tesla Model 3 cars have now again made an appearance on roads in India. Believed to have been spotted in a parking lot on the Mumbai-Pune Expressway, the electric cars were wrapped in camouflage for early testing ahead of its India launch.

The spotted Tesla Model 3 cars have the number plates MH 14 TCL 226 and MH 14 TCL 337 respectively. Looking at the Model 3 images, one of the units seems to be a bit raised than the other. Although highly likely, it isn’t conclusive evidence to assume that Tesla will improve the ground clearance of the car for Indian roads.

337 seems to be new. Is Ground Clearance raised in it or just image thing?

Considering the fact that Tesla doesn’t have a manufacturing plant in India, the price of the Tesla Model 3 is undoubtedly going to be expensive. However, the government is trying to lure the automaker by promising production costs lower than China. Moreover, recent reports suggest that the country may end up slashing import duties on electric cars by up to 40 percent to attract foreign manufacturers.

Based on rumors, Tesla Model 3 is expected to make its way to India by late 2021. Plus, the expected starting price of the Tesla Model 3 is rumored to be around Rs. 60 lakhs, including customs duties. The price is likely to go down if the government reduces the import duties. And that’s something we will have to wait and find out.

Tesla’s highly-anticipated entry to India comes at a time when the two-wheeler EV market is also picking up its pace. Other than Ather Energy, new players have entered the segment, including Simple Energy and Ola Electric with its S1 and S1 Pro. From the looks of it, the coming years will likely shape the EV landscape in India.