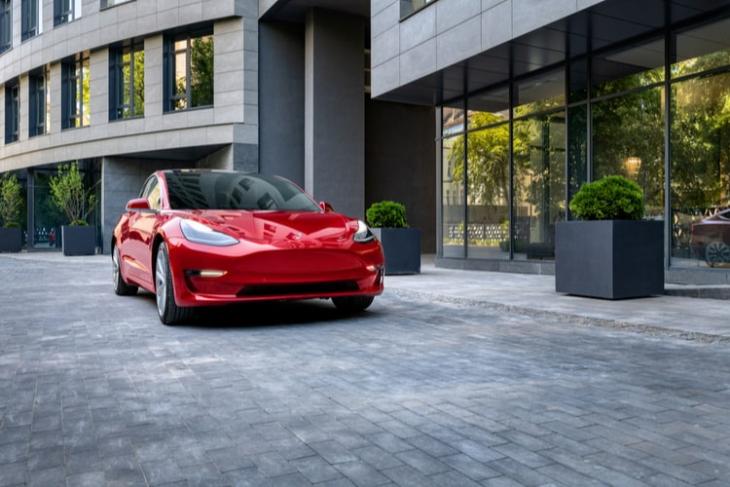 American EV giant Tesla has been eagerly waiting to launch its electric vehicles in the Indian market. The company has been in constant talks with Indian authorities regarding the launch, and we have already seen Tesla cars being tested on Indian roads. Now, a Tesla Model 3 was recently spotted at the office of the Ministry of Road Transport and Highways (MoRTH).

According to reports, Tesla India representatives recently met with Mr. Giridhar Aramane, the secretary of the Ministry of Road Transport and Highways, in Delhi to discuss Tesla’s India launch plans. Although details of the meeting are currently under wraps, Aramane was also spotted taking a short test drive with the Tesla reps in a red Tesla Model 3 car.

Chetan Bhutani, a political and business journalist at Zee Business, recently shared a 45-second video on Twitter that shows the Tesla Model 3 at the MoRTH office in Delhi. Moreover, the video shows Giridhar Aramane sitting in the passenger seat of the Model 3. You can check out the tweet right below.

Now, although the discussions of the meeting are not yet known, the reports suggest that the Tesla India officials met with the secretary to discuss India’s plans to slash import duties for electric vehicles (as it plans to bring Tesla Model 3 to the country).

For those unaware, after Tesla confirmed to enter the Indian market, CEO Elon Musk complained about the high import duties on electric cars in India. Following this, reports suggested that India was planning to reduce the import duties on EVs from 100% to 60%. However, as per recent reports, the Indian authorities have now turned down the plan and want Tesla to set up a manufacturing unit in the country. We currently do not know how Tesla reacted to this request.

The American auto giant will reportedly launch the Tesla Model 3 with a rumored price tag of Rs. 60 lakhs in India. It will presumably import the models from its Gigafactory in China as Completely Built Units (CBUs). This will be the primary reason for the high import duties. However, when or if Tesla sets up a manufacturing unit in India in the future, the price could come down to just Rs. 30 lakhs.

The company has not yet announced a launch timeline for its electric vehicles in India. Nonetheless, we recently saw Indian authorities approve four Tesla cars for the India launch. So, the company might launch its cars in the country sooner rather than later.