Even as Kodi and Torrents continue to bear the brunt of the ongoing war on piracy, the one platform that seems to have got away relatively scot-free up until now is Telegram. The messaging app with end-to-end encryption is said to be a favorite among journalists, activists, and other privacy-conscious users, but has often come under fire for enabling terrorists, pedophiles and far-right outfits to operate away from the prying eyes of law-enforcement.

Now, a report published by The Outline says that the app is also a hotbed for pirated content, and has been so for years. According to the report, Telegram’s much talked-about privacy features and its uploading and sharing capabilities, have been enabling pirates to thrive on the platform. While Telegram clearly states that it has a zero-tolerance policy towards piracy, the report seems to suggest that the company has actually been doing very little to eliminate piracy-related channels from its platform.

In case you didn’t know it already, Telegram is a cloud-based, open-source, end-to-end encrypted messaging platform that was founded back in 2013 by Pavel Durov. The app is available for free on both Android and iOS, and as of March 2018, is believed to have over 200 million monthly active users. Russia is said to be the largest market for Telegraph, with India coming in at number two.

Telegram also offers a number of features and functionality have facilitated piracy. First off, it allows all types of files to be shared. Telegram Channels can be created which are built for broadcasting messages to large audiences. It also offers unlimited file hosting, although, file size is limited to 1.5GB per file. All of which means that piracy-related channels and content are mushrooming on the platform.

In its report, The Outline claims to have spoken to 13 channel admins, who admitted to using the platform to share pirated content, including movies, music, e-books, computer programs and mobile apps. Many of these channels have upwards of 100,000 members, and most can easily be found simply by searching for the content. The report also claims that many groups and channels on the platform are offering stolen credentials (login details) from popular streaming services, such as Netflix, Spotify, Hotstar, etc. 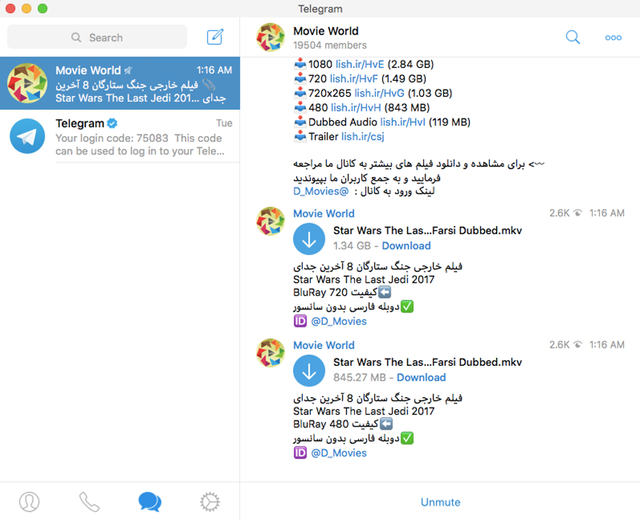 On its part, Telegram continues to claim that it cracks down on piracy from time to time, but even as its closes down a few channels every now and then, critics claim that a vast majority of them continue to thrive for the most part. In fact, Durov was earlier quoted as having said that piracy is the least of his concerns, with the company more focused on removing content involving violence, illegal porn and other dubious stuff from its platform. That being the case, it won’t be a massive surprise if piracy continues to thrive on Telegram in the foreseeable future.