You must have heard about the “tbh” (short for ‘to be honest’) app getting very popular in the States and well, Facebook has just acquired the teen compliments app. The idea behind tbh is quite simple. It lets teenagers, be it high-schoolers or college students, compliment each other using anonymous polls. The polls come with a touch of positivity, something that has helped the app amass close to 5 million users and attract attention from the biggest social networking giant.

While Facebook has promised to keep tbh up and running, we’d understand if you are looking for tbh alternatives. Also, since tbh is only available in the States, you might want a different anonymous teen compliments app for you. Well, whatever your reason might be, here are 7 tbh alternatives you can use:

tbh Alternative Apps You Can Try

As the name suggests, you can use Covertly to post truly anonymous messages from your smartphone without providing any of your personal information. It does not require you to login or supply your social media credentials to interact with other users. You only need to define a radius around your location to see and interact with anonymous messages posted by anyone around you.

Even though you’ve selected a radius, you can jump into search and see messages posted by users in any part of the world. You can upvote the messages you like and downvote the ones you don’t. All comments are accompanied by emoji profile pictures, adding to the fun of anonymity. 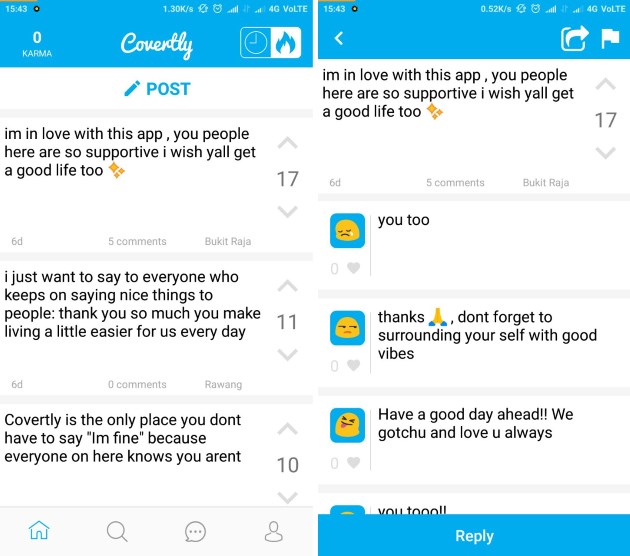 If you’re only interested in sharing messages with people within a fixed radius around your location, Covertly should be your pick. My time with the app was quite pleasant since their community is currently small and free of trolls or bullies for now. The only thing this social network now needs is more people.

Whisper, if you’re not aware, is one of the most popular anonymous social networks that has stood the test of time. Its competitors, such as Secret or Yik Yak, have already closed shop but Whisper continues to live due to its huge community and content-focused plan.

Falling in line with Covertly and tbh, Whisper is also 100% anonymous and allows you to post your messages in the form of text cards (with automatically suggested background images) on the platform. You can either directly post a Whisper that will be visible to everyone or post them in an interest group related to the topic. All messages are posted under a truly random display name. 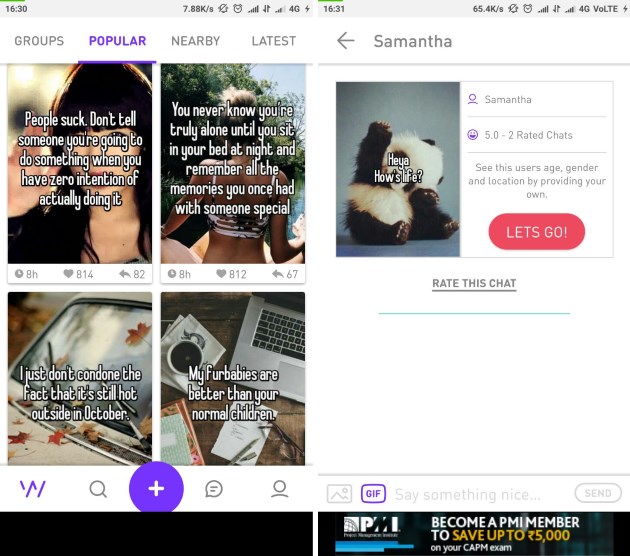 In addition to posting your thoughts/opinions on the platform, you can choose to message any of the users as well. Whisper integrates a messenger within its app, allowing the users to interact and reveal their identities to one another if they want.

While there is a lot to explore within Whisper, the platform is plagued with lots of ads and hate speech to the brim. You could easily explore communities focused on explicit content, vulgar posts and comments floating around unchecked on the platform. Whereas, there is another side of Whisper, one controlled by AI, that produces stories and short videos from Whisper messages posted by you anonymous people.

Not only does Psst! Anonymous has a truly brilliant name, but it also brings along features from Snapchat and Whisper to build its social networking platform. Psst! is a one-stop app that allows you to share your daily nuances, experiences, and news but they’re available on the platform for 48 hours. Your posts are ephemeral and disappear once their defined time limit comes to an end.

Psst! Anonymous is a community-focused anonymous social network and chat platform. It allows you to interact with topic-based posts, which appear in the form of blog posts in the app. You can keep track of the topic by following, watching or commenting on it. You won’t be able to store any post because of the completely anonymous ideology of the app, which also does not allow you to screenshot the same. 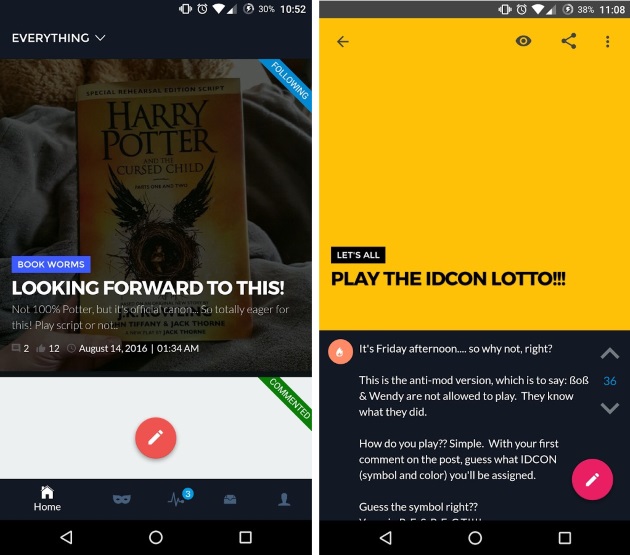 Even the messaging service integrated into the app is ephemeral, a feature popularised by Snapchat. This means you’ll be able to send timed messages (a maximum timer of only 30 seconds) that are deleted once you’ve opened the same. Even the identity (username) of a person remains hidden until and unless you interact with the post. But, you can still choose to keep it hidden from everyone.

This is one of my favorite apps because it allows you to cut through the clutter by following the topics and interacting with like-minded individuals. It’s also because Psst! doesn’t leave behind any trace of your posts, comment or messages. They all disappear for eternity, not only from your timeline but also from the app’s servers, which is definitely a plus if you’re looking to share some deep dark secrets with someone.

Swiflie checks most of the boxes for an anonymous social networking platform, the major difference being that it requires you to sign up to use the platform. It has also decided to make the posts temporary, but not completely. It hasn’t defined an expiration date for the posts but has instead handed down the quality check process to users itself. You can like or dislike (also referred as adding salt) any post to control its lifespan.

In addition, the screenshot shown underneath tells that you can also conduct polls via the Swiflie app. So, it is also covering the base upon which the whole tbh platform is built. You can either choose to publish the post under your display name or keep it anonymous. Also, you have the option to follow and post within groups/schools and converse with individual users inside the app. 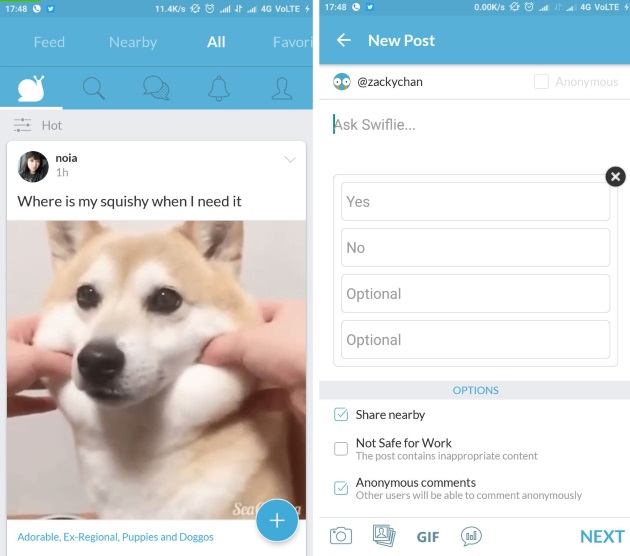 While the community on Swiflie is pretty active and keeps you hooked in, there’s one huge problem I faced with the platform. It takes the app a little too much time to load the feeds, be it showing all, filtered or your favorite posts. It sometimes gets frustrating to look at an empty screen that’s not loading any content. This means it is true to its mascot, a snail, as it loads slowly.

There’s a high possibility that you’ve already heard about Sarahah, which recently gained a lot of traction among teens for being the latest crack at anonymous messaging. Based on a concept of collecting compliments (the true meaning of Sarahah), the app has implemented the same but with much simplicity. 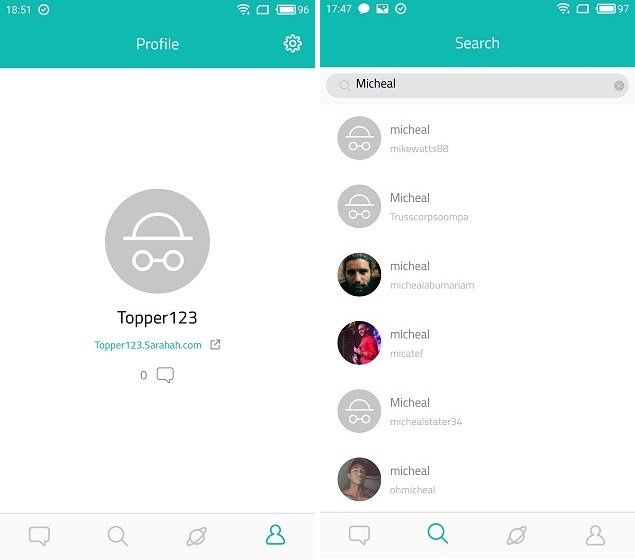 While Sarahah was launched with the aim of allowing you to gather constructive criticism for yourself, but it turned nasty quicker than you can think. It all depends on the persons interacting with your profile but it’s an easy outlet for cyber-bullying and hate speech. It, instead of helping people gather feedback, has only taken a shot at their self-esteem.

The security researchers have further torn down the platform for being a giant cesspool of loopholes and vulnerabilities. It is being said that the web app is vulnerable to CSRF (cross site request forgery) attacks while the mobile app is free from the same. So, if Sarahah is still interesting for you, I’d suggest you use the mobile app to gather feedback.

Quite similar to other anonymous social networks, Jodel is also based on the concept of showing you real-time posts in your area. But, instead of publicizing itself as an app for masses, it focuses on the student community. It wants students on the campus to post, and vote on revelant posts to highlight conversations that should be the talk of the day.

The simplistic user experience of Jodel is designed to focus on the hottest news of your university/school campus. There are three tabs, which show you the latest, most popular and ongoing conversations in a particular area. You can also change the hometown from the top right menu to see posts from other campuses. 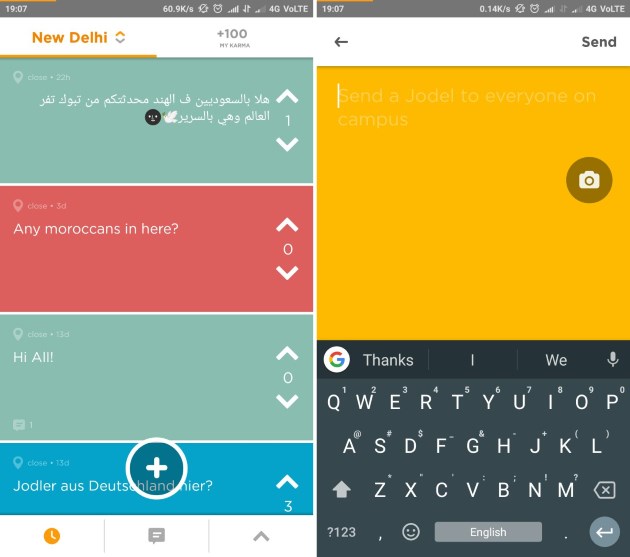 From my time with the app, I discovered that Jodel is simply fit for random conversations about wasteful topics. The community is somewhat lacking and inactive, which should not be the case for an app spreading the buzz news around campus. You vote to make a post appear at the top, which would be quite difficult in this scenario.

While Vent may not intuitively be an anonymous messaging platform, it is resemblant to tbh in one major aspect. Vent is all about positivity and community support, wherein you can post about your current state of mind. You can choose from a set of moods to depict what you’re currently feeling to the people on the app.

You can then choose to interact with anyone via emojis or comments, a measly means to show your support. Vent also includes groups to enable you to discuss topics you’re most interested in, be it anonymously (via an alias) or a real profile. 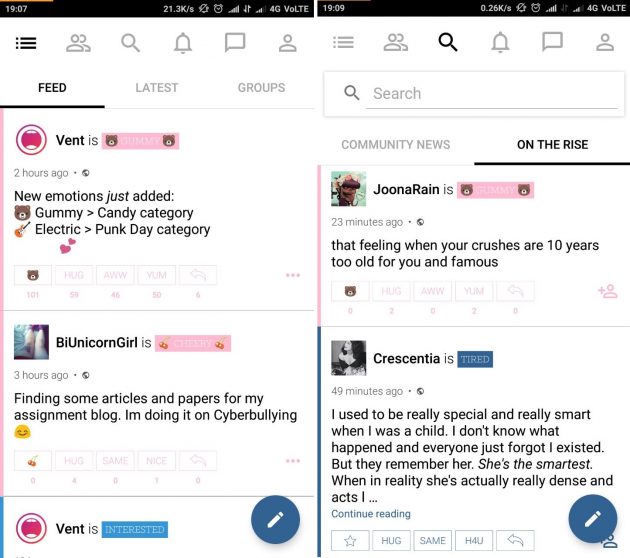 The prominent feature of Vent is that you’re never left alone to sulk by yourself. The whole community is quite active, shows support via slack-like emojis, and helps you when you are in need. They can easily help uplift your mood, all without having to reveal each other’s identity. You can choose to continue talking to anyone via private messages.

SEE ALSO: What is Sarahah and Why is it the Hottest App in Town?

What Sets tbh Apart From its Alternatives?

If you’ve been paying close attention, you will have already noticed the difference between tbh and every other alternative that we’ve suggested. It is the text. tbh eliminates the task of writing the posts and instead adopts a polling-focused approach that not only needs less effort but also prevents teens from spewing hate or bullying others.

tbh gained popularity and a buyer within only nine weeks of its launch because of its uber- simple approach to anonymity, something which had been implemented numerous times in the past. It makes you feel better about yourself, especially when you’re voted the best for something (maybe it’s your smile, dance or your intellect). If you’ve already tried tbh, then share your experience in the comments down below.