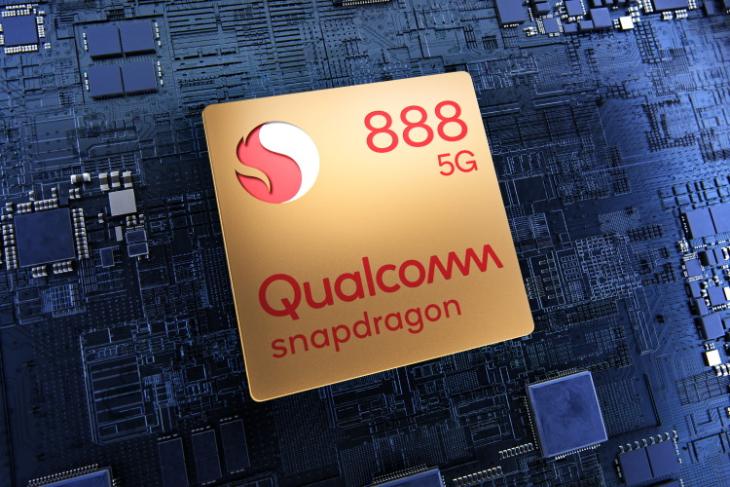 Qualcomm announced its latest flagship chipset, the Snapdragon 888 5G, during the virtual Snapdragon Tech Summit. The chipset brings key improvements on the 5G, gaming, and photography fronts. Snapdragon 888 will power a majority of premium Android phones in 2021. The chipmaker has already revealed the names of 14 OEM partners, including Asus, OnePlus, Xiaomi, Motorola, and others, that will launch smartphones powered by the Snapdragon 888 chipset.

Let's hear what our Founder, Chairman, and CEO @Leijun has to say about the new powerful #Snapdragon888 and our upcoming flagship #Mi11! #InnovationForEveryone #SnapdragonSummit pic.twitter.com/amnj4CN7D6

Xiaomi has confirmed that the Mi 11 series will be one of the first smartphones to be powered by the new Snapdragon 888 5G mobile platform. The company did not reveal more details. A render for the standard Mi 11 with a square triple camera island is, however, doing the rounds of the Internet.

Realme is also working on a flagship smartphone, codenamed Realme Race, with the Snapdragon 888 5G under the hood. The company shared the news on Twitter. Also, a render, along with a screenshot of the ‘About Us’ page, has surfaced on the Internet. You can see how the Realme Race will look in real-life in the image above.

In an official blog post, Oppo confirmed that its next Find X series smartphone will be powered by the Snapdragon 888 5G chipset. This means the upcoming Find X3 series, whose display specifications have already been outed by Oppo, will have this flagship chipset under the hood.

“We are excited to be one of the first to release a flagship smartphone featuring Snapdragon 888 in the first quarter of 2021. We are sure that the next Find X series will deliver an extraordinary all-round experience to users around the globe,” said Alen Wu, Oppo VP and President of Global Sales.

Nubia will release two Snapdragon 888 5G phones next year. One of them will be launched under the company’s brand and called the Nubia Z, while the other will arrive under its gaming sub-brand ‘Red Magic’ and dubbed the Red Magic 6, as shown off in the teaser posters above.

ZTE has today revealed that it is working on three new premium lineup with the 5G-enabled Snapdragon 888 chipset. It has even shared a teaser poster for one of these new smartphones, the ZTE Axon 30, on Weibo. It will be a successor to the Axon 20 that was recently launched with a hidden under-display selfie camera.

Quoting the Mi 11 series announcement, Redmi GM Lu Weibing on Weibo confirmed that Redmi will also be one of the first few OEM partners to release a Snapdragon 888 5G phone. 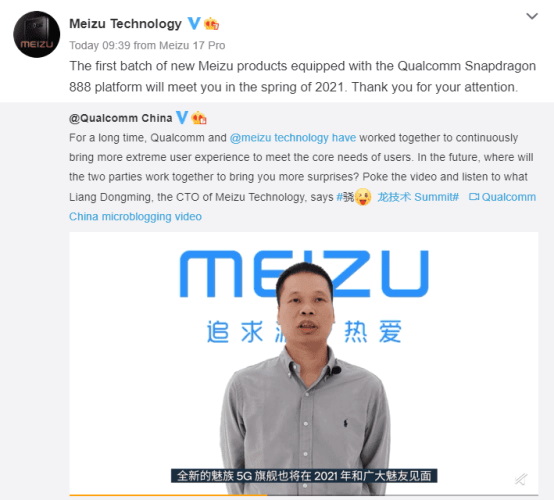 In an official Weibo post, Meizu also confirmed that it will launch a Snapdragon 888-equipped flagship series in the Spring of 2021. The Meizu 17 flagship lineup arrived back in May last year, which means the Meizu 18 (or whatever it may be called) will launch around the same time next year.

While OnePlus has not made an official announcement, the upcoming OnePlus 9 and 9 Pro will be one of the many Snapdragon 888 5G phones to launch in 2021. There’s not much known about both the phones right now, but you can see how the OnePlus 9 Pro will look like right here.

Asus is also one of the 14 OEM partners for the Snapdragon 888 5G launch. We can expect the Taiwanese giant to launch the ZenFone 8 and the ROG Phone 4, a souped-up gaming phone, in 2021. The new Elite Gaming features will further improve the gaming experience, and we cannot wait to try it out.

The Lenovo-backed company jumped back into the flagship market with the launch of the Motorola Edge+ last year. We believe Motorola will unveil a second-gen Edge+ or a flagship foldable phone with the Snapdragon 888 5G under the hood next year.

Sony will upgrade its flagship and compact flagship lineups with the launch of Xperia 1 III (read as Mark 3) and the Xperia 5 III phones powered by the Snapdragon 888 5G chipset.

LG killed off its G-series earlier this year, replacing it with the experimental LG Wing and Velvet powered by the Snapdragon 765G SoC. It was only the LG V60 ThinQ that arrived with the Snapdragon 865 chipset onboard. Now, we expect its successor, the LG V70 ThinQ, to be one of the many Snapdragon 888 phones launching next year.

Last but not least, Xiaomi-backed gaming phone maker Black Shark will also refresh its portfolio with the launch of the Black Shark 4 and 4 Pro. They will most likely have the Snapdragon 888 5G chipset driving the game performance.

Which Snapdragon 888 5G Phone Has You Excited?

Xiaomi has slowly been building out its flagship portfolio, and I’m really excited to see what it will have in store for us early next year. The Realme Race also looks compelling. It will go up against many budget flagships, so keep an eye out for this one. I enjoy Nubia’s fan-laden Red Magic gaming phones, and hence, the Red Magic 6 is another Snapdragon 888 phone that will be on my radar.

What about you guys though? Which Snapdragon 888 phone are you most excited to check out? Let us know in the comments below.

Also, this is just a preliminary list of Snapdragon 888 5G smartphones that will launch in 2021. We will keep updating this list and add more flagship smartphones as and when we learn about them.