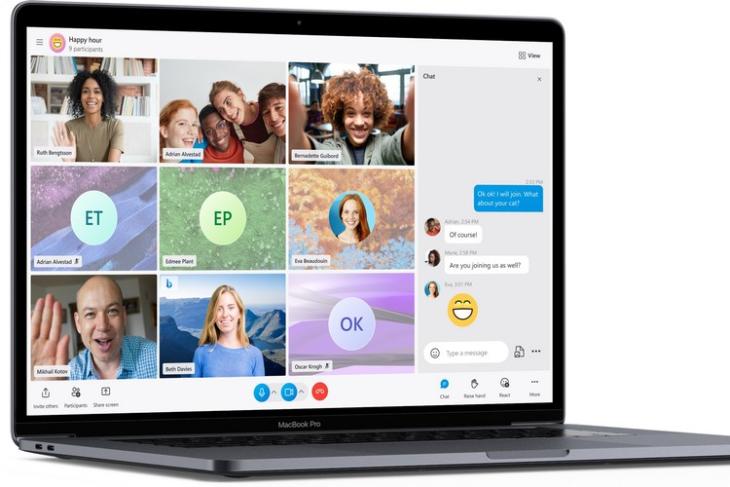 Following the massive popularity garnered by Zoom in the past year, Microsoft has been adding various new features to its OG video calling service Skype to rival the competition. Now, the Redmond giant has shared its future plans for Skype and teased various changes coming to the video conferencing platform in the coming weeks. As per the teasers, Skype users are about to witness a lot of changes.

Microsoft shared an in-depth official blog post to share what’s coming to Skype. In the blog post, the company announced that Skype will get a complete redesign with a focus on speed, customizability, and reliability. Microsoft is planning to add several new features to the platform later this year, including new layouts and themes for the Call Stage, new redesign options, and more.

For starters, the company will rearrange the video feeds of other participants into a grid-like view to include everyone, even those who are not sharing their video, in the call. There will be larger video feeds in the top bar.

Microsoft will also add many new viewing options for the Call Stage screen. This includes the grid view, speaker view, a large gallery view, and the Together mode (similar to Microsoft Teams) that makes it seem like everyone in a call is sharing a common space. Plus, Skype will now also show beautiful backgrounds for the audio-only participants and they are the same images that the platform uses for its background replacement feature. However, users will still get the option to hide audio-only participants on Skype.

Furthermore, Microsoft aims to give Skype a major visual overhaul with upgraded chat headers and gradient buttons. Moreover, the company will add various themes for users to customize Skype as per their needs and color choice.

On the performance front, Microsoft says that it optimized Skype in key scenarios to deliver a 30% boost in performance on desktop, and over 2,000% increase on Android. In addition, mobile users will also be able to use the Office Lens app to scan documents while on a call to instantly share them with the participants.

Other than these, Microsoft is planning to add customizable notification sounds and an updated super reactions HUD that will allow users to search or pin favorite reactions to access them instantly during a call. Another new feature coming to Skype is TwinCam that will let users share an additional video feed from a second device.

Now, although Microsoft did not specify the exact timeline for when these new features will release for Skype, the company said they are coming later this year. So, we can expect the company to release the above features for Skype as soon as the Windows 11 rollout becomes stable after its public release on October 5. Hence, Microsoft might start rolling out the features sometime in November.