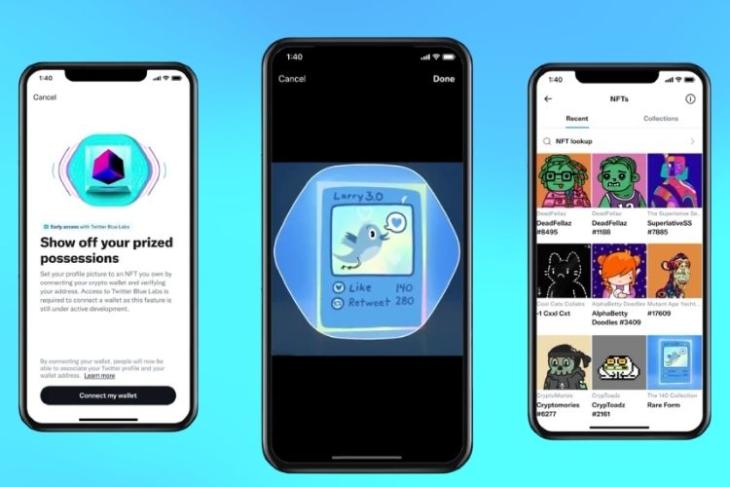 If you are a regular internet-treading individual, I’m sure you have heard about NFTs by now. After Bitcoin and Metaverse, NFT has now become a buzzword across the globe as the market for the asset continues to grow at an increasing rate. Citing its popularity, Twitter has been testing NFT profile pictures to allow users to show off their digital assets on the platform. Now, the company has started rolling out the feature to the public as part of its Twitter Blue subscription service.

Now, if you are unaware, the NFT profile picture feature on Twitter was initially discovered by reputable tipster Alessandro Paluzzi back in September 2021. However, the micro-blogging platform has only now started rolling out the feature for Twitter Blue subscribers on iOS as part of its early-access Labs feature.

The feature essentially lets users connect their crypto wallets and show off their digital assets on Twitter as their profile pictures. At launch, it will support crypto wallets like Coinbase Wallet, Trust, Argent, Rainbow, MetaMask, and Ledger Live. So, users can connect their desired crypto wallet, authenticate their account, select an NFT that they want to set as a profile picture, and show it off to the world. The platform will initially support JPEG and PNG NFTs minted on Ethereum.

Ready to show off your NFT? Follow these simple steps to connect your crypto wallet and let’s see your NFT PFPs! pic.twitter.com/epSL7VXG5o— Twitter Blue (@TwitterBlue) January 20, 2022

Twitter says that the support for NFT profile pictures gives users a way to show their digital non-fungible tokens (NFTs) to the world on the platform. “Twitter is where people go to talk about things they care about, and often where people have their first experience with crypto and NFTs,” the company told Techcrunch in an email. “We’re now seeing people use NFTs as a form of identity and self-expression, and as a way to join the thriving community and increasingly active conversation on Twitter,” it further added.

Coming to the availability of the feature, it is currently limited to a select few countries, including the USA, Canada, Australia, and New Zealand. Moreover, users will have to pay an additional monthly Twitter Blue subscription to access the feature.

Meanwhile, if you are still unsure about what exactly NFTs are, you can check out our in-depth story on the same to know all about them. Also, what do you think about Twitter supporting NFT profile pictures? Do you think it will boost the market for NFTs? Let us know your thoughts in the comments.