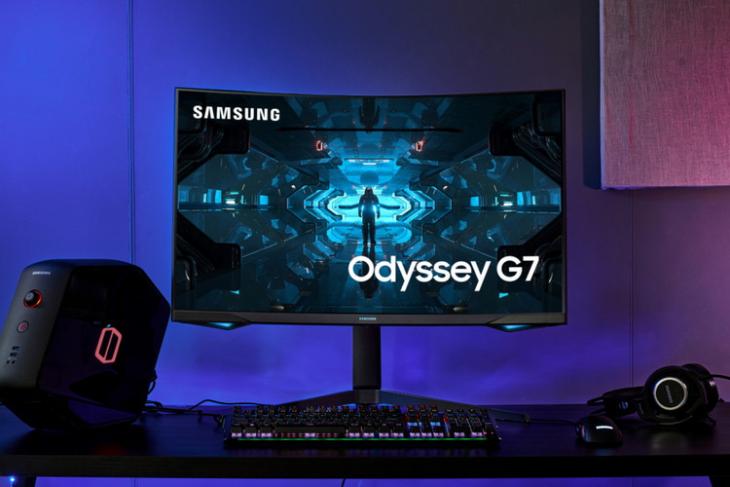 Having been unveiled at CES 2020 back in January, Samsung’s Odyssey G7 curved gaming monitor has finally been launched globally. In an official blog post announcing the global launch, Samsung said that the “Odyssey lineup reimagines the gaming experience by combining the deepest, most immersive curved displays with best-in-class performance features”.

It’s worth noting that alongside the Odyssey G7, Samsung had also unveiled a larger, more high-end monitor called the Odyssey G9, and while Samsung hasn’t announced anything about its official availability yet, it is currently up for pre-order on Overclockers UK for £1,279.99 (around Rs. 1.19 lakh or $1,600) The company also last week announced an official sponsorship deal with global esports team and three-time League of Legends champion, T1 Entertainment & Sports (T1), to market the two monitors.

The Odyssey G7 comes in 27- and 32-inch options, and according to Samsung, is the world’s first 1000R gaming monitor, meaning it boasts a curvature radius of 1,000 millimeters. It also features a rapid 1ms response time with 240Hz refresh rate. The QLED monitors comes with WQHD resolution (2,560×1,440 pixels), 16:9 aspect ratio, 600 cd/m2 peak brightness and Quantum dot technology. The G7 also comes with NVIDIA G-Sync compatibility and Adaptive Sync on DP1.4.

The monitor also comes with a color-changing rear core lighting system that can change colors based on the preferences of the gamer. The company has also added dynamic shapes and lighting effects to the front of the monitor. Samsung is yet to announce the pricing, but we’ll update the article once we get some info on that front. As for its official launch in India, there’s no announcement about that just yet.