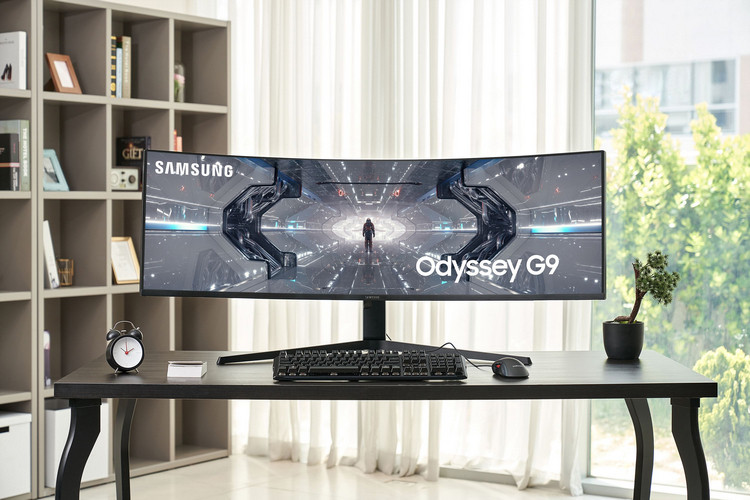 Having launched its Odyssey G9 and G7 curved gaming monitors globally earlier this year, Samsung has finally brought both models to India. Unveiled at CES 2020 earlier in January, the devices will “reinvent the gaming experience by bringing together comfortable curvature, immersive interaction, and perfect picture quality,” said the company in an official press release announcing the India launch.

While the Odyssey G9 comes with a 49-inch panel, the G7 is offered in 27- and 32-inch options. They are the “world’s first 1000R gaming monitors,” which means they have a curvature radius of 1,000 millimeters that matches the curve of the human eye for maximum immersion and minimal eye strain. They’ve also been awarded the industry’s first ‘Eye Comfort’ certification by leading certification organization, TÜV Rheinland.

The G9 has a striking new design with a glossy white exterior and futuristic ‘infinity core’ lighting at the rear, including 52 colors and five lighting effect options. The standout design and lighting effects complement any gaming setup, said the company in a statement.

Like its bigger sibling, the Odyssey G7 also features a rapid 1ms response time with 240Hz refresh rate and Quantum dot technology. Unlike the G9, however, the G7 sports a standard WQHD resolution (2,560×1,440 pixels) with a 16:9 aspect ratio and 600 cd/m2 peak brightness. It also comes with NVIDIA G-Sync compatibility and Adaptive-Sync on DP1.4.

The Odyssey G7 also comes with a color-changing rear core lighting system that can change colors based on the preferences of the gamer. The company has also added dynamic shapes and lighting effects to the front of the monitor for a striking visual effect.

The company’s official web-store in India has also listed a 27-inch Odyssey G5 model which is expected to be the cheapest of the lot.

Samsung’s New Website Lets You Try One UI on iPhones; Here’s How to Use It

Samsung May Partner with Olympus for Future Smartphone Cameras