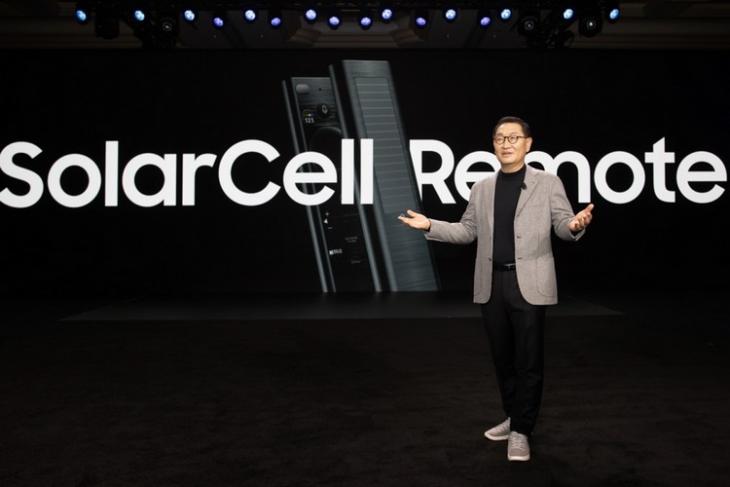 As climate change continues to negatively affect the environment of our planet, tech companies are trying their best to reduce their carbon footprint on the environment. Citing the issues and in an attempt to reduce the amount of e-waste in the world, Samsung had introduced a solar-powered Eco Remote for its 2021 TV lineup at last year’s CES. Now, the Korean has added a nifty feature to its next-gen Eco Remote that was recently showcased at CES 2022.

Samsung introduced a new version of its solar-powered Eco remote during its presentation at this year’s CES. While the new Eco Remote comes with the same solar-charging capabilities, it packs a nifty trick up its sleeve.

Other than gaining power from environmental solar energy, Samsung’s new SolarCell Eco Remote is able to convert radio frequencies from devices like a Wi-Fi router into electricity to charge itself. The company added the RF (radio frequency) harvesting technology to its Eco Remote to let it preserve its charge by “collecting routers’ radio waves and converting them to energy.”

Apart from the new charging technology, Samsung’s Eco Remote can use indoor or outdoor light to charge itself, or the users can charge it using a USB-C connection. Hence, there is no need for physical AAA or AA batteries to power the TV remote. This, as per Samsung, would eliminate “more than 200 million batteries from landfills.”

Moreover, Samsung also introduced a white-color model of the Eco Remote this year. The company said that it would better complement the aesthetics of its lifestyle TVs like Serif, Frame, and the Sero series.