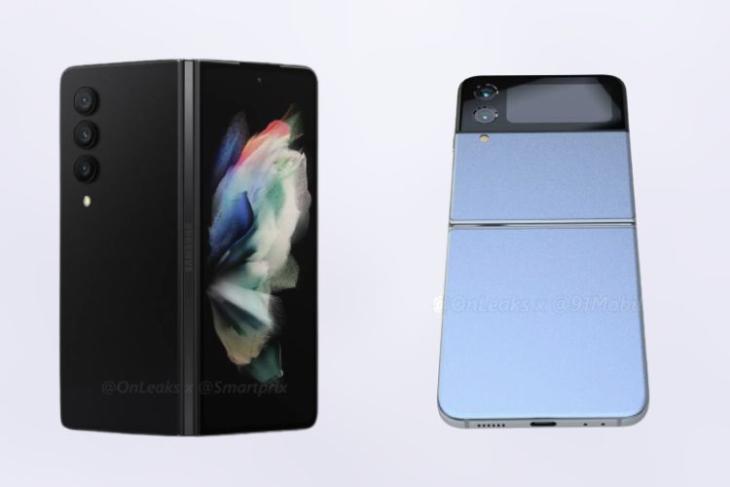 Samsung is often seen making headlines for its highly-rumored next-gen foldable devices, the Galaxy Z Fold 4 and Z Flip 4. Although the company is yet to officially confirm the launch, we now have high-quality renders for both the devices, showcasing them in all their glory. So, without further delay, let’s take a closer look at the upcoming Galaxy foldable devices below.

Starting with the Galaxy Z Fold 4, the latest renders come from reputable tipster Steve Hemmerstoffer, aka OnLeaks, and shows the design of the upcoming Samsung foldable. As per the renders, the Z Fold 4 looks similar to its predecessor. But there are a few changes here and there.

As for the screens, the Galaxy Z Fold 4 will reportedly sport the same 6.2-inch cover display and a 7.6-inch primary display as its predecessor. However, the device will come with a high-refresh-rate OLED panel and an improved in-display fingerprint sensor.

Coming to the Galaxy Z Flip 4, these renders also come from OnLeaks and provide a closer look at Samsung’s upcoming foldable flip phone. According to the tipster, the Galaxy Z Flip 4 will look exactly like last year’s Z Flip 3 but come with slightly different dimensions.

Galaxy Z Flip 3 will roughly measure 165.1 x 71.9 x 7.2mm, will sport a 6.7-inch display, and come in the same clamshell-foldable form factor. There will also be a smaller 1.9-inch display at the back of the device to show notifications, a music player, and more when the device is folded. It is expected to be available in multiple color options, and Samsung could even release a Bespoke Edition of the Z Flip 4, much like the Z Flip 3 Bespoke Edition, or a special edition model like the recently-launched Z Flip 3 Pokemon Edition. You can check out a few of the renders of the Galaxy Z Flip 4 in the slide below.

As for the specs sheet, most of the details and features are currently under the wraps, but they are expected to include the now-delayed Snapdragon 8 Gen 1+ CPU, improved cameras, and much more. The Galaxy Z Fold 4 is also expected to come with S Pen support. Going forward, however, we expect more details to show up online ahead of the launch. So, stay tuned for further updates, and let us know your thoughts on the leaked renders in the comments below.

Samsung Galaxy Z Fold 4 May Get a ‘Super UTG’ Display and an Inbuilt S Pen: Report