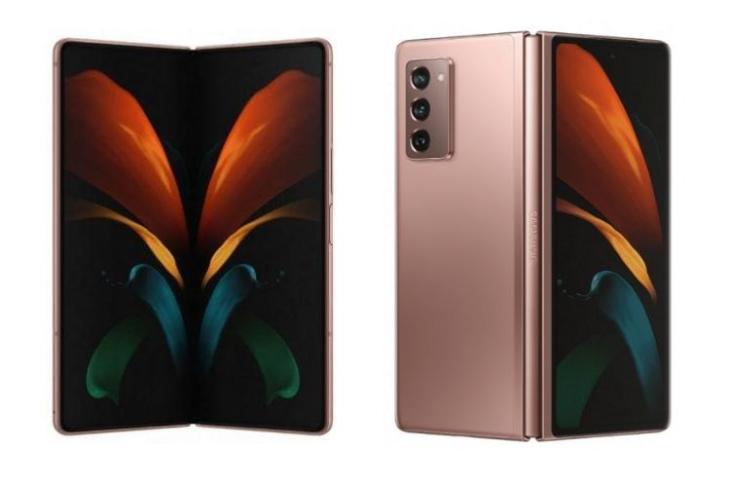 Samsung’s virtual Galaxy Unpacked event is right around the corner. On 5th August, the company has confirmed to take the wraps off five new devices. We already have a good idea about what these devices are and have gotten a closer look at one of them – the Galaxy Z Fold 2. It’s a successor to Samsung’s original foldable phone but adopts the new Z-series branding like the Galaxy Z Flip.

Galaxy Z Fold 2 5G, as the device will be called, first leaked earlier this month but the render was super blurry. You could make out the overall changes but today, we have a clear look at Samsung’s plan to attract more users towards its foldable phone. Thanks to reliable tipster Ishan Agarwal and the folks at MySmartPrice, we get to explore the new Galaxy Z Fold 2 from all angles.

I mean, the first-gen Galaxy Fold looks fine. It’s different than any other phone in the market and things are about to only get better with the Galaxy Z Fold 2. Samsung has decided to address one of the biggest complaints with this upgrade. The cover display is now bigger and almost bezel-less instead of just weirdly existing in the center.

It’s expected to be a 6.23-inch AMOLED display with 2267 x 819-pixel resolution and a 60Hz refresh rate – as compared to the 4.6-inch screen aboard its predecessor. Also, you can see in the render attached above, it includes a punch-hole selfie camera.

Turning our attention to the inside, Samsung has swapped out the huge side-notch on the right side for a modern punch-hole cutout. This means you now have a cleaner and larger main display. It will look like a single piece of foldable screen and will certainly be an eye-candy. It will be a 7.7-inch Super AMOLED display with a 120Hz refresh rate, as per the report.

Galaxy Z Fold 2 will boast the same book-like folding mechanism as its predecessor. It will most likely feature the same brush-like protection – like the Galaxy Z Flip – to prevent dust and debris from entering the hinge. You may already know that the first-gen Galaxy Fold faced durability issues prior to shipping – in the reviews phase.

You can also see the side-mounted fingerprint sensor – the same as the original Galaxy Fold. There’s also a rectangular triple camera cutout – that looks like the one that will be baked aboard its upcoming flagship, the Galaxy Note 20 Ultra. It’s expected to be a 64MP primary camera, a 12MP ultra-wide camera, and a 12MP telephoto camera.

Galaxy Z Fold 2 will be powered by the Snapdragon 865+ chipset, coupled with a 4,356mAh battery pack. It will support both 15W wireless and 15W reverse wireless charging, as per the report. The foldable phone will retail at almost the same price as the original Fold at $1,980 (around Rs. 1,48,200). It will be available in two colorways – the stunning Mystic Bronze and Mystic Black.