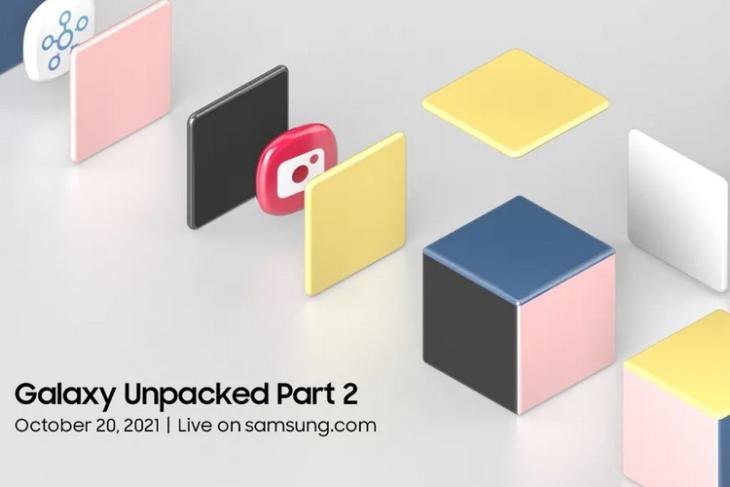 Next week is shaping up to be a busy one in the tech world. After Google scheduled its Pixel 6 event for October 19, Apple last night unveiled plans for its ‘Unleash’ hardware event for October 18. Now, Samsung has joined in and has revealed a surprise second part of the Galaxy Unpacked event. The event is set for October 20 at 10 AM ET or 7:30 PM IST.

“Our users are multifaceted and live life in so many colorful, interesting, and unique ways. As such, the technology they use every day should reflect their individuality. Join Galaxy Unpacked Part 2 on October 20 to see how Samsung is opening up new experiences for self-expression through technology,” reads the event invite.

The event invitation doesn’t really reveal what to expect from the event. However, one likely candidate at the event is new color variants for the Galaxy Z Flip 3. It’s rumored that Samsung could unveil Gray, Light Pink, White, Blue, Yellow colorways for the Z Flip 3 at the event.

Other than that, reliable tipster Evan Blass hints that Samsung may unveil new smart refrigerators in the Bespoke lineup at Galaxy Unpacked Part 2. For those wondering about the launch of the long-rumored Galaxy S21 FE 5G, that’s a possibility too. Take this with a pinch of salt, though, as the ongoing chip shortage has reduced the odds of Samsung launching a new Fan Edition phone in the S21 lineup.

The teaser video Samsung has added with the event invite highlights Samsung’s first-party mobile apps. Hence, we could also expect the South Korean tech giant to discuss the top One UI 4.0 features and announce the availability of its custom Android skin for eligible Galaxy phones at the Galaxy Unpacked Part 2 event next week.