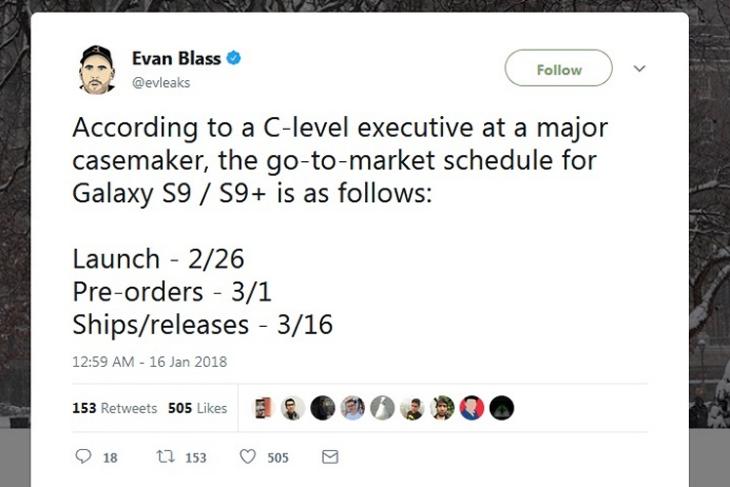 After all the rumors, leaks and speculations over the past several weeks, Samsung is finally believed to be getting ready to launch its next-gen flagship smartphones, the Galaxy S9 and Galaxy S9+. While the company is still playing its cards close to its chest, a recent tweet by tech journalist and renowned leakster, Evan Blass, seems to suggest that the devices will be launched at the upcoming Mobile World Congress tech show in the Spanish city of Barcelona.

Noted tipster Evan Blass (@evleaks) says that the Galaxy S9 / S9+ will launch on February 26, with pre-orders starting on March 3. The device apparently will start shipping from the March 16, if the report turns out to be correct.

According to a C-level executive at a major casemaker, the go-to-market schedule for Galaxy S9 / S9+ is as follows:

While Samsung is unlikely to announce any of the Galaxy S9’s features and specifications ahead of its upcoming launch, alleged leaks from earlier this month seemed to indicate that the device will feature a 5.8-inch Quad HD+ Super AMOLED Infinity display with an 18.5:9 aspect ratio.

The Galaxy S9 is expected to be powered by the Snapdragon 845 in the U.S., while the Indian market should get the Exynos 9810-powered variant as usual. The device also promises to ship with 4GB of RAM and 64GB on-board storage while featuring Knox Security, AKG-tuned audio and an IP68 certification to signify water and dust resistance.

The Galaxy S9 will also apparently come with a “Super Speed Dual Pixel 12MP” primary camera with variable f/1.5 and f/2.4 apertures, while the front-facing camera will apparently be an 8MP snapper with auto-focus support. The device is also expected to ship with support for wireless charging when paired with a compatible charging pad.

Beebom will be at Mobile World Congress so stay tuned to our site for the full coverage and reviews.