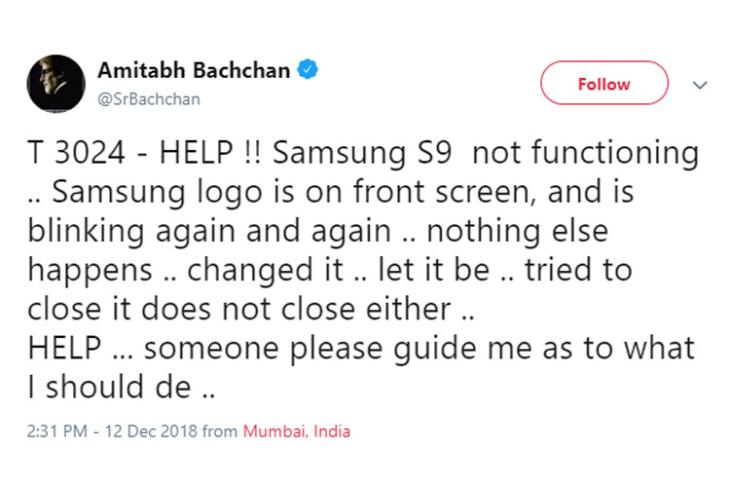 Twitter can be a weird place, really. Sometimes you end up finding something new and interesting, whereas most other times, you’ll find funny and oddball things to laugh at.

Earlier this morning when I was mindlessly scrolling through my Twitter feed during my daily commute to work, I came across actor Amitabh Bachchan’s tweet, in which he’s ranting about his phone failing to turn on. Here’s the tweet –

T 3024 – HELP !! Samsung S9 not functioning .. Samsung logo is on front screen, and is blinking again and again .. nothing else happens .. changed it .. let it be .. tried to close it does not close either ..
HELP … someone please guide me as to what I should de ..

As you can see, Bachchan is talking about the Galaxy S9. From what I can understand, it looks like the phone was stuck in a boot loop, a state in which a phone fails to boot and keeps flashing the manufacturer’s logo.

Boot loops are not unheard of. They’re very common these days, and a phone can suffer from boot loop issues due to various reasons. In a follow-up tweet, Bachchan did confirm that Samsung was quick enough to respond and fix the phone.

Twitterati, however, couldn’t resist but follow up with funny tweets about how Bachchan is tweeting about a rival phone maker’s device. I say rival because Bachchan, as we all know, is a brand ambassador of OnePlus. He was seen promoting OnePlus’ phones previously. Heck, we even got pictured with the OnePlus 6 before its official launch. So, naturally, this tweet was seen as a direct hit at Samsung.

Xiaomi’s India’s Managing Director Manu Kumar Jain, however, couldn’t help but use this opportunity to plug Xiaomi phones. He quoted Bachchan’s tweet and said, ” It’s time to switch phones. You can maybe try the most loved technology brand in India. Happy to send a flagship phone to you, if you want.” Here, check out Jain’s tweet –

It's time to switch phones. You can maybe try the most loved technology brand in India ❤️😇

This, by the way, isn’t the first time Jain has snatched the opportunity to promote Xiaomi phones. He once wooed PayTM founder Vijay Shekar Sharma on Twitter, when his iPhone X was acting up. So looks like Jain doesn’t waste any time in using public declarations of failures of rival brands, for the good of Xiaomi.