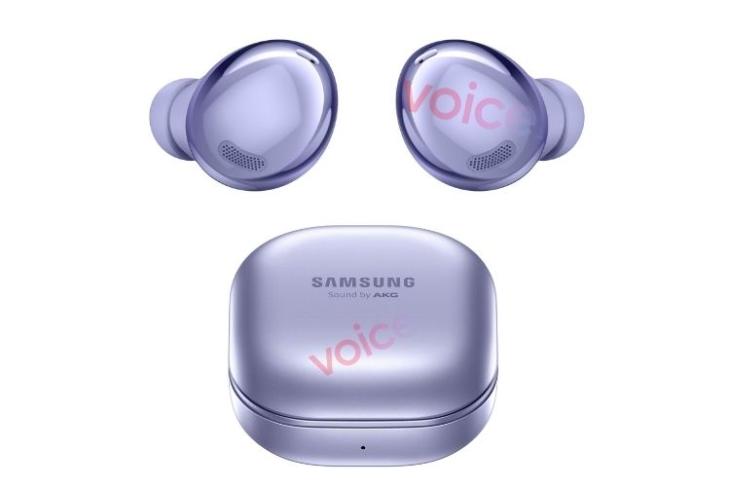 The Samsung Galaxy S21 series, launching next year, will be accompanied by a new pair of TWS earbuds dubbed the Galaxy Buds Pro. We’ve been hearing rumors and have seen key specifications for these Buds leak via certification listings. And today, reputable tipster Evan Blass (better known as @evleaks) has given us a close look at the Galaxy Buds Pro.

The Galaxy Buds Pro will be a successor to the Galaxy Buds+ from earlier this year and not the new bean-shaped Buds Live. Samsung will, however, take cues from the latter in terms of design and finish. These TWS earbuds will be housed in a square charging case (exactly the same as Buds Live). It carries the ‘Sound by AKG’ branding on top. The earbuds have the shiny polished design as the Buds Live but include silicone tips for a better fit.

Also, though you must have already noticed, the Galaxy Buds Pro has leaked in quite an attractive violet colorway. Not a lot of internal specifications for the TWS earbuds have surfaced online. But, we do know that it will include a much bigger 500mAh battery, double that of the Buds+ (270mAh).

The Galaxy Buds Pro will arrive with Active Noise Cancellation (ANC) support. It will be the second TWS earbud from Samsung to feature this technology. The silicone tips will provide better isolation as compared to the bean-shaped Buds Live.

As per evleaks, these earbuds will exist alongside the Buds+ and Buds Live. It won’t be replacing either and will arrive as yet another premium TWS offering from Samsung in under six months. The rumor mill suggests that Galaxy S21 series with S Pen support, along with the Galaxy Buds Pro, will launch in January. We, however, suggest you take these rumors with a grain of salt. Samsung will most likely stick to its usual February launch timeline.