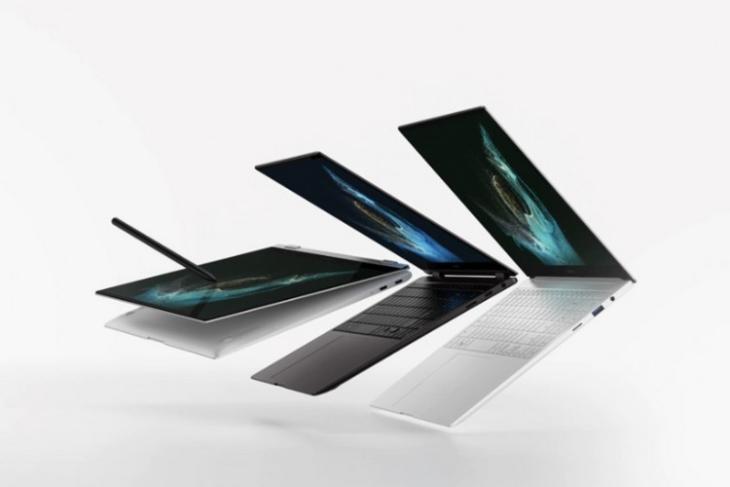 The devices come in two screen sizes – 13.3-inch and 15.6-inch, along with a Super AMOLED display with a 16:9 aspect ratio and up to 500 nits of brightness. Galaxy Book 2 Pro 360, on the other hand, features a touch-enabled screen with S-Pen support to use the device in tablet mode.

There is also a 68Whr battery inside both the Galaxy Book 2 Pro and the Galaxy Book 2 Pro 360. Furthermore, both models support the latest Wi-Fi 6E for speedy wireless connections, a fingerprint scanner, and various video-calling features such as Studio mode, AI-noise canceling, and more. Other than these, the devices come with Samsung’s Multi Control features, Bixby support, and Galaxy Book Smart Switch features.

Turning to the non-pro Galaxy Book 2 series, it includes a standard model and a 2-in-1 model with a 360-degree hinge, much like the Galaxy Book 2 Pro series. However, there is also a Galaxy Book 2 Business Edition that runs Windows 11 Pro out of the box. While the Galaxy Book 2 sports a 15.6-inch AMOLED display, the Galaxy book 2 360 comes with a smaller 13.3-inch screen with touch and S-Pen support.

Other than these, both models come with dual-speakers tuned by AKG and support Dolby Atmos. Plus, there is a 1080p webcam with dual microphones to support high-quality video calls on both the Galaxy Book 2 and the Galaxy Book 2 360. As for the I/O ports selection, the Galaxy Book 2 series comes with a Thunderbolt 4 port, a USB-C port, a USB-A port, an HDMI port, a microSD slot, and a 3.5mm audio combo jack.

As for the Galaxy Book 2 Business Edition, the device comes with a 14-inch 1080p display. Inside, it packs up to 12th-Gen Intel Core i7 processor and up to Intel Irix Xe GPU. The processor is paired with 8GB of RAM and 256GB of storage. There is also a 51.5Whr battery with support for USB-C fast charging.

Other than these, the Galaxy Book 2 Business Edition features a Thunderbolt 4 port, an RJ45 port, an HDMI connector, a microSD slot, a USB-C port, and a 3.5mm headphone jack. Plus, the device also supports the Wi-Fi 6E and Bluetooth 5.1 technologies. It runs Windows 11 Pro out of the box and comes in a Graphite color option.

Finally, coming to the Galaxy Go, the device comes with a 14-inch 1080p LCD display fitted on a 180-degree hinge. Under the hood, the device packs the Qualcomm Snapdragon 7c Gen 2 processor, paired with 8GB of RAM and up to 128GB of eUFS storage. There is also a 5G option for the Galaxy Book Go that is powered by the Snapdragon 8cx Gen 2.

Other than these, the Galaxy Book Go features 2x USB-C ports, 1x USB-A port, a 720p webcam, a microSD slot, and a 3.5mm headphone jack. It comes in a silver color option and runs Windows 10 out of the box.

These laptops will be available to buy from Amazon and Samsung’s official website in India. You can also pre-reserve the Samsung Galaxy Book 2 and the 2 Pro series laptops ahead of their release in the market.

Samsung Teases ‘The Most Powerful Galaxy’ Unpacked Launch for April 28