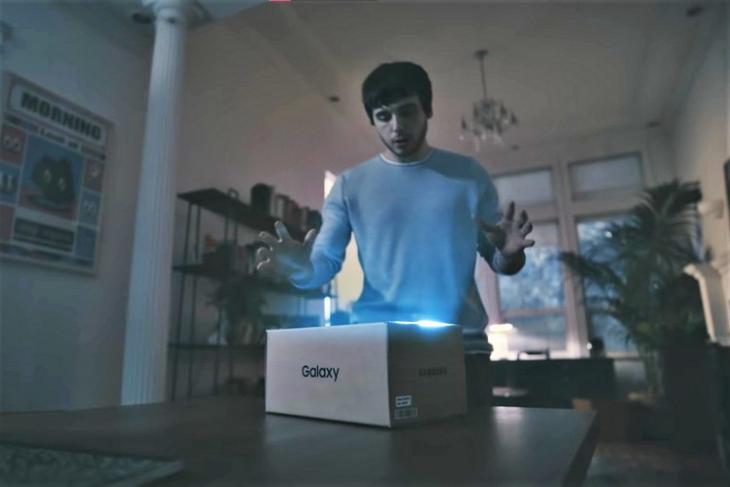 Samsung today announced a new Galaxy Unpacked event scheduled for April 28. At this event, the Korean giant will unveil new Samsung hardware products under its Galaxy lineup. Moreover, Samsung has teased the launch of “the most powerful Galaxy” product to date for this event.

Samsung released an official trailer video on its YouTube channel to announce the event. You can check it out right below.

In the video, we can see a Samsung delivery truck carrying something in a cubical box. The mysterious device inside is shown to be so powerful that it disrupts every electronic device in its path. And when a person finally receives the box, he opens it up to see a light shining from the inside.

Now, of course, it is all fictional and there will be no Galaxy product that will shine a light on your face when you open its box. However, the teaser shows one thing that might be of significance. The “most powerful Galaxy” device that Samsung is planning to unveil will not be a compact one (not the Galaxy S21 FE 5G, then). This means that Samsung might be looking to launch new Galaxy Book devices at the Unpacked event. And if that is the case, then we are all up for it, aren’t we?

Samsung launched the first Galaxy Book S with a Qualcomm processor back in 2019. It switched to Intel ones with the launch of an upgraded version of the said device last year. However, even the Intel-powered Galaxy Book S, which currently exists in the market, packs an older-gen Intel Lakefield Hybrid processor.

So, it would be ideal for Samsung to upgrade its Galaxy Book device with Intel’s latest 11th-gen processors. And that might be worthy of the moniker of the “most powerful Galaxy” device to date. However, we would not know that for sure until April 28 when Samsung unveils the device.

The Galaxy Unpacked event is scheduled for the said date and will start at 10 AM ET. This means the event will start at 7:30 PM here in India and will be live-streamed on Samsung’s official website and YouTube channel.