Reliance Jio has launched a new prepaid recharge plan that offers 2GB of daily data for 51 days. Being marketed as the ‘Jio Cricket Pack’, the new plan is an STV (Special Tariff Voucher) that offers only data benefits without any free voice calls and SMSes. While the company already offers some of the most lucrative data plans in the market, the new STV brings down its data prices further by offering 1GB of high-speed data at just Rs. 2.46.

While the pack does bring some much-needed additional data for heavy users at an affordable price-point, the recent tariff increases across the sector have hit users hard, with all three leading operators – Jio, Airtel and Vodafone Idea – increasing their charges by up to 40 percent. The move spelt the end of the ultra-low pricing regime that was ushered in by Reliance Jio when it entered the Indian market with dirt-cheap mobile data and free voice calling back in 2014-15. 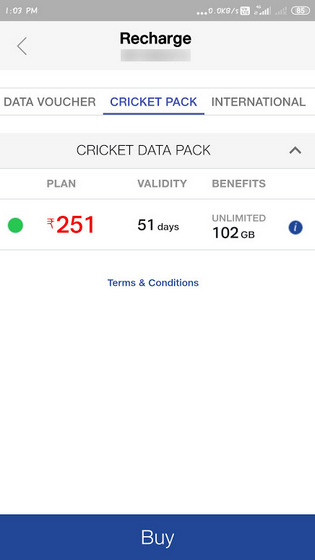 It will be interesting to see how the new development will effect the telecom industry, given that both of the other two leading players in the industry have long been complaining about Jio’s ultra-cheap plans and how that has been affecting their business in the country. In fact, faced with the continuing onslaught from Jio and a massive tax bill from the Indian government, British telecom giant, Vodafone, is reportedly looking to exit the Indian market.

While the recent price hikes were expected to bring some degree of stability to the market, the latest move from Jio once again throws the cat among the pigeons, so it will be interesting to see how its rivals will respond in the coming days.