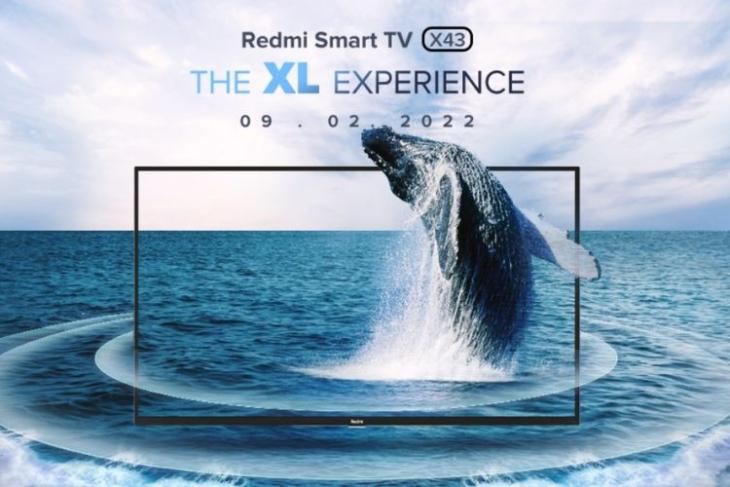 Xiaomi is prepped up to launch the Redmi Note 11S and the Redmi Smart Band Pro in India on February 9. In addition to a new phone and a smart wearable, the company has also revealed that a new Redmi smart TV will also launch in India next month. Here’s a look at what to expect.

In an official tweet and media invite, Xiaomi has revealed that will launch the Redmi Smart TV X43 in India on February 9. The smart TV is touted to provide “the XL experience” with a 4K HDR display and support for Dolby Vision. The screen will get thin bezels too. And it will be paired with 30W speakers with Dolby Atmos to make the audio-visual experience a delight.

The TV is also confirmed to provide flagship performance and the latest PatchWall UI 4.0 experience. Other than this, not much is known about the upcoming Redmi smart TV.

As revealed earlier, the smart TV will launch along with the Redmi Note 11S, which will be a successor to the Redmi Note 10S. The phone, which looks similar to the Redmi Note 11T 5G, is confirmed to come with 108MP quad rear cameras, a 90Hz AMOLED display, and more. A MediaTek Helio G96 chipset, 33W fast charging, and more are also expected in terms of specifications. As per the latest report, we can expect the device to start at Rs 17,999, thus, falling in the budget price range.

As for the Redmi Smart Band Pro, it was introduced initially in China last year. It comes with a big 1.7-inch AMOLED display with Always-on-Display functionality, a SpO2 sensor, up to 14 days of battery life, 110+ workout modes, water resistance, and much more. The launch of all these Redmi devices is only a few days away, and we shall update you on their official details on launch day. Hence, stay tuned for more information.