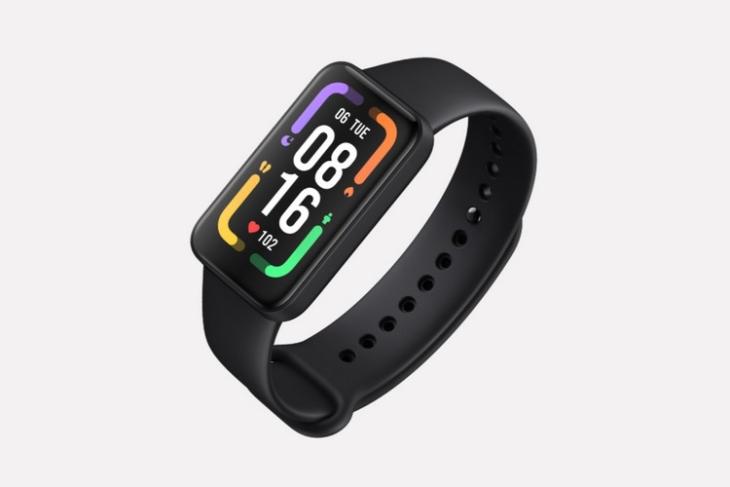 Starting with the display, the Smart Band Pro sports a 1.43-inch AMOLED display with always-on display support. It also includes an auto-brightness adjustment feature to automatically set the brightness of the screen based on the surrounding light. Plus, users can choose from various watch faces via the companion app to match their style.

Coming to the health and fitness-focused features, the Redmi Smart Band Pro comes with a heart-rate sensor and a SpO2 sensor that can continuously monitor the heart rate and blood oxygen levels of users to determine their stress levels and other health vitals. It also comes with the company’s LifeQ health algorithm that promises to accurately measure the health of users.

The smart wearable also comes with over 110 workout and sports modes like jogging, cycling, hiking, yoga, and many others. Furthermore, as the device is 5ATM water-resistant, it also offers several dedicated modes for water-based activities such as swimming, water polo, and others.

Coming to the battery of the Redmi Smart Band Pro, the device packs a 200mAh Li-ion battery that promises to deliver up to 14 days of battery life on a single charge with regular usage and up to 20 days of battery life with power-saving mode. Other than this, it supports Bluetooth 5.0 technology to connect with Android and iOS devices.

As for the price of the device, the Redmi Smart Band Pro retails at £44.99 (~Rs 4,541) in the UK. However, we expect Xiaomi to launch the device at a lower price in India. We will get more details about the pricing on February 9 when the company officially launches the wearable in India.Coming to the availability of the fitness-focused smart band, it will be available to buy on Amazon India, Xiaomi’s official website as well as Mi offline stores across the country.