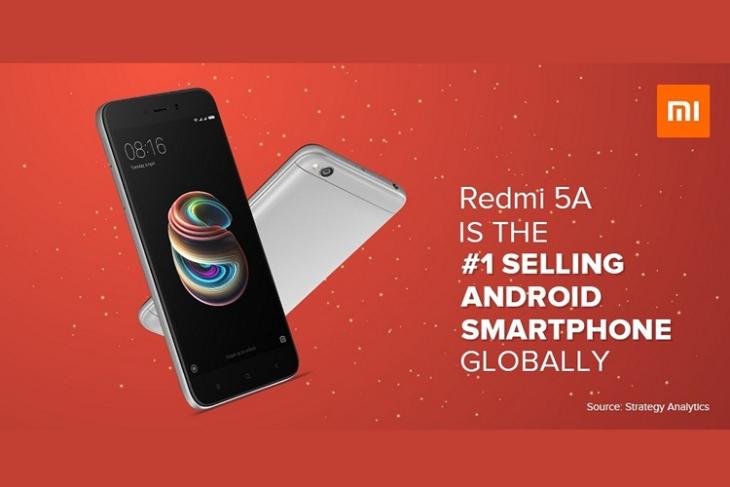 According to Strategy Analytics, Xiaomi’s entry-level Redmi 5A smartphone was the best-selling Android handset globally during Q1, 2018. This was highlighted earlier today by a tweet from the company’s Global VP, Manu Kumar Jain. The report further states that the Galaxy S9 was the second-best selling Android smartphone around the world, while the iPhone X retained the title of best-selling smartphone overall.

Redmi 5A aims to bring 100s of Mn people online. The BEST entry-level smartphone – specs of a ₹10K phone under 6K. #DeshKaSmartphone

The latest ‘Smartphone Model Tracker’ report further states that global smartphone shipments hit 345.4 million units in Q1 2018. The market, however, remained as fragmented as ever, with the top-six most popular models together accounting for under 15 percent of all smartphones shipped worldwide during the quarter.

The report further states that the Apple iPhone X was the best-selling device globally with as many as 16 million units being shipped in the period, even amidst all the talks about falling iPhone X sales and a ‘weaker iPhone franchise‘. This is the second quarter in a row that the device became the world’s leading smartphone ahead of popular offerings from Samsung and others.

In terms of the shipment numbers for the Redmi 5A, the Chinese smartphone giant reportedly shipped 5.4 million units of the device and captured a 2 percent market-share all by itself, largely on account of its popularity in India and China. The numbers ensured that the device came in at number five, with four different iPhone models taking up the first four slots.

The Galaxy S9, meanwhile, came in at number 6 with 5.3 million units shipping during the first three months of this year. It is worth noting, though, that the Galaxy S9 duo only started shipping towards the end of the quarter, while the other devices were on the market throughout the quarter. Overall, Strategy Analytics says that the devices are “off to a very good start”, and are expected to become the best-selling smartphones during the current quarter.

Xiaomi Redmi 5A with 3GB RAM is Now Available Offline at ₹7,499