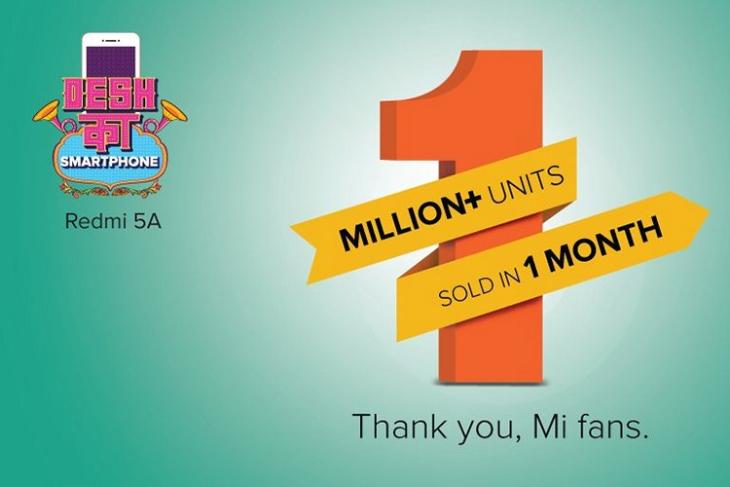 It was back in 2014 that Chinese tech company Xiaomi took its first tentative steps outside its homeland with its entry into the rapidly-expanding Indian smartphone market. The company has only gone from strength to strength since then, managing to tie South Korean heavyweight Samsung as the biggest smartphone vendor in the country, as per a report published by IDC last November.

The Chinese firm reportedly managed to triple its smartphone shipments in Q3 2017 on a year-on-year basis on the back of best-sellers like the Redmi Note 4. While the Q4 results are yet to come in, the company apparently continued to have a great time during the last few weeks of the year as well if this week’s tweet from the company’s managing director of India operations, Manu Kumar Jain, is anything to go by.

Thrilled to announce that we've sold 1+ Mn #Redmi5A in less than a month!

According to Jain, Xiaomi sold more than one million units of the Redmi 5A smartphone in less than a month since its release. The device was heavily promoted by the company as “Desk ka Smartphone”, which translates to “the country’s smartphone” in an attempt to shrug off virulent attacks from right-wing nationalists who accuse Chinese firms of killing off Indian businesses.

The Redmi 5A is manufactured in India and offers great hardware at the entry-level segment. The phone comes in two variants. While the base model has a super-affordable Rs. 4,999 price-tag and offers 2 GB RAM + 16 GB storage, the more premium version costs Rs. 6,999 and ships with 3 GB RAM + 32 GB storage. Both variants are available exclusively on Flipkart in Black and Gold color options.

Xiaomi Redmi 5A with 3GB RAM is Now Available Offline at ₹7,499