If you’re out there looking to buy a budget-friendly device with good performance, chances are, you’re the ideal Indian consumer and the first name on your list is Xiaomi. Or maybe even the second and third name, since Xiaomi has so many options for budget consumers. Now, with the Redmi 5A, the company has brought about another new entry in the budget segment, which should appeal to a lot of users. And at its competitive pricing of just ₹5,999 for 2GB/16GB variant and ₹6,999 for 3GB/32GB variant, the device actually ends up offering a lot more than you’d expect out of it. Well, if you’re someone looking for his/her next budget smartphone device, read on, as we bring to you our in-depth review of the Redmi 5A:

Before we get to the review part, let us get the specifications out the way. Redmi 5A comes with some pretty good hardware, which you can check out below:

The Redmi 5A comes in a nice red cardboard box, featuring simple and decent packaging. The box has almost everything you’d expect from a device at this price point, including: 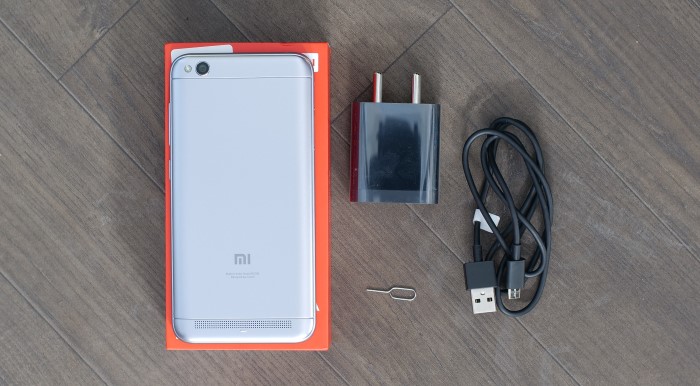 The design of the Redmi 5A is pretty much the same as every other Xiaomi device out there. The body is made up of plastic, with a brushed metallic finish on top of it. In images, the device looks quite good, and might even seem sort-of premium to some users. However, the in-hand feel of the device is a different story altogether. The device feels quite cheap when in hand, and while I was able to hold it quite comfortably in my hand, I reckon that was due to the small form factor and not the finish of the device.

All the buttons are well laid out on the right side of the device, with the left side being populated by the dual-SIM card and micro-SD card slots. There’s a 3.5mm jack on the top accompanied by an IR-blaster, and the bottom features the microUSB port for charging. The back side features the Xiaomi branding, followed by the speaker grill. There is no fingerprint scanner on the Redmi 5A, but that is an understandable omission, considering the price of the device. 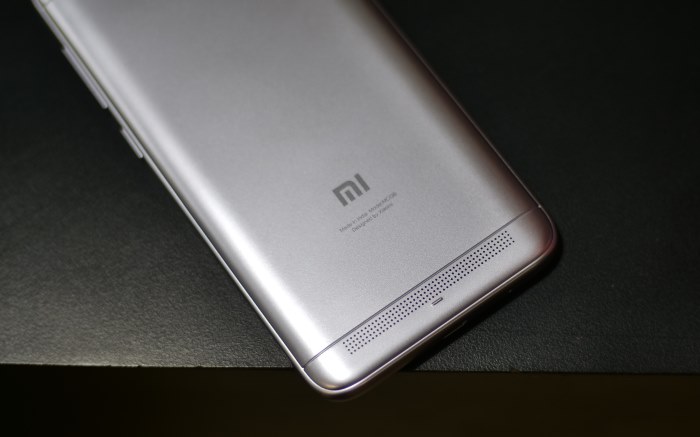 Yes, the design of the Redmi 5A is simple and subtle, with everything almost similar to the previous Xiaomi devices, the build quality is a solid reminder of you getting what you paid for.

The Redmi 5A sports a 5-inch HD display with a pixel density of 296ppi. For a budget device, my expectations weren’t really that high. However, the Redmi 5A does perform very well, and I personally had no complaints in the display department. The images are sharp, and the text looks crisp enough. 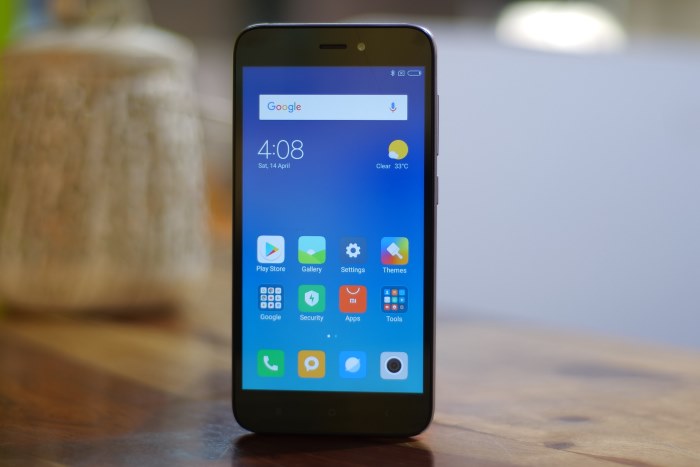 The viewing angles are great and the color reproduction of the display is also more than satisfactory. The brightness levels of the device are good. While you might not be totally happy with outdoor usage, the brightness settings should suffice for most of the cases. 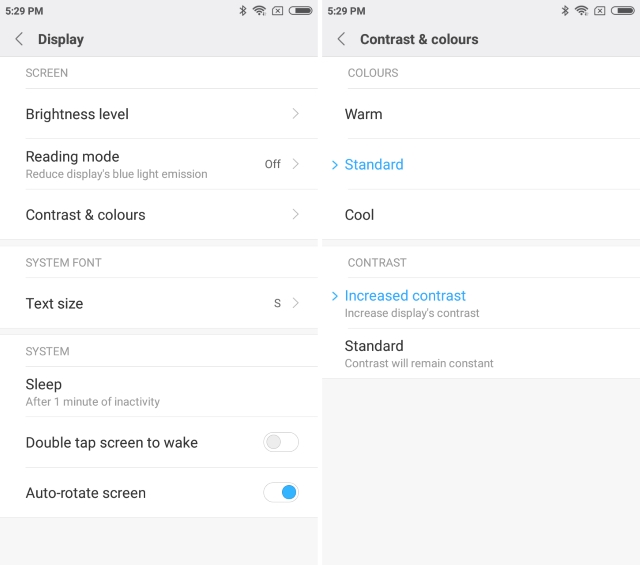 Xiaomi has also included an option to adjust the tone of the colors on the screen, allowing the user to choose between Warm, Standard, and Cool tones. There’s also an option for adjusting the contrast of the display.

Redmi 5A comes with Android Nougat 7.1 with Xiaomi’s MIUI 9 skin on top of it. We’ve previously talked about all the great features that MIUI 9 comes with, so while I won’t get into all the details of it, the overall user interface is nice and easy to use. 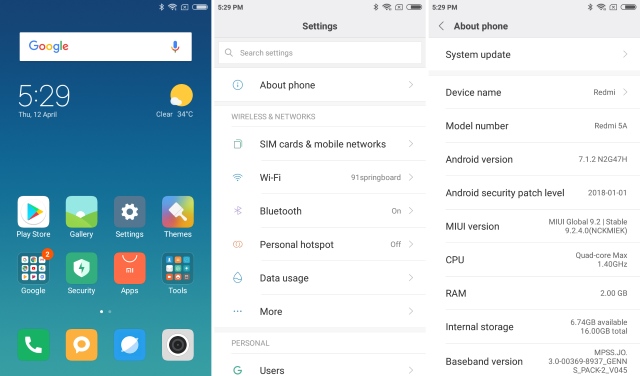 MIUI 9 is much more than just an Android skin. Thanks to plenty of included features and a great attention to detail, the user experience is polished and quite cohesive. If you’ve ever used a Xiaomi device in the past, the Redmi 5A’s user experience should be the same. And even if you’re migrating from a different device, there is a very slight learning curve to the OS, and it is quite easy to get accustomed to it.

Powered by the Qualcomm Snapdragon 425 processor, the Redmi 5A packs in 2 GB of RAM with 16 GB of internal storage. There’s also a 3GB/32GB variant available in the market, however, we’ll be addressing the performance of the smaller variant. 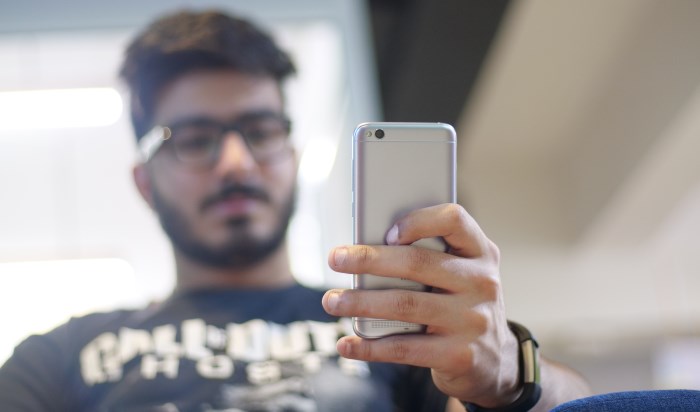 MIUI is known for effective memory management, and it shows. The Snapdragon 425 is not the best processors out there, but in my usage of the device, the overall performance was snappy and more than satisfactory. Sure, the device can’t handle all your beastly gaming titles out there, but as long as your usage is limited to juggling between a couple of apps and stuff like that, you should be good to go. Even with 2GB of RAM, I was able to multitask quite easily. However, if you’re someone who relies on running a lot of apps in the background, I’d suggest that you opt for the 3GB variant, simply because MIUI in itself hogs up a lot of memory. 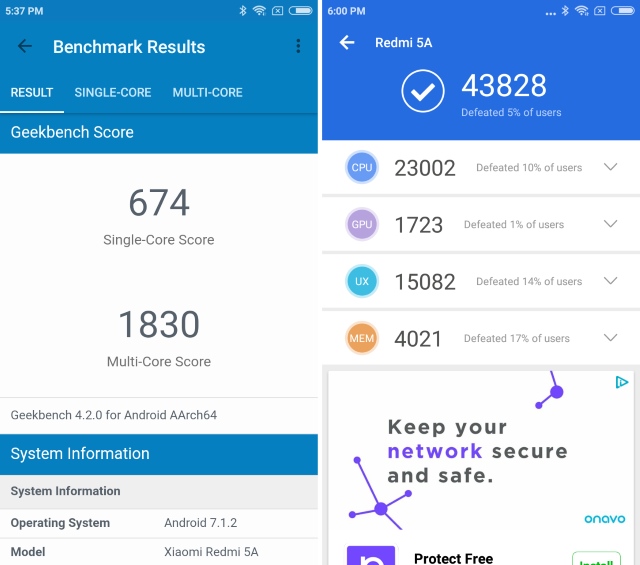 While I am not a huge fan of benchmarks, there are people who really like to rely on them. Well, the Redmi 5A performs decently in most benchmarks out there. I ran Antutu and Geekbench on the device, and the scores were good enough.

All in all, the Redmi 5A is a decent performer for everyday tasks for casual users. The performance is good and is as expected from the device’s price tag.

Xiaomi devices are known for offering some really great hardware along with their fan-favorite MIUI skin. However, I’ve always had one complaint with Xiaomi devices, and that has been the camera department. Except for the recently released Mi A1 and the Redmi Note 5 Pro, almost every Xiaomi device, regardless of the price tag, has had poor camera performance. The Redmi 5A holds true to that fame and disappoints miserably.

Yes, one must keep the price point in mind, so I wouldn’t go all the way to blame Xiaomi completely, and as such, the camera quality is just average. The 13 MP primary camera on the Redmi 5A manages to capture images with decent details and good enough sharpness. The color reproduction is bad, and low-light performance is a joke, but then again, you can’t have it all on a budget device, right? 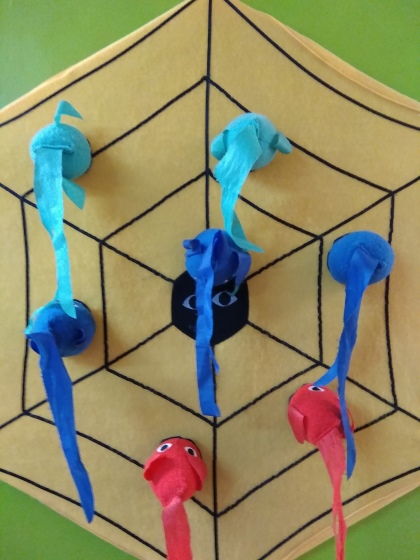 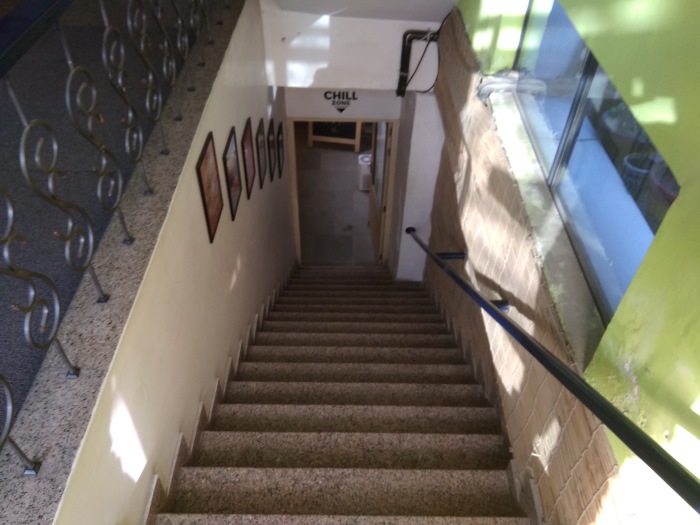 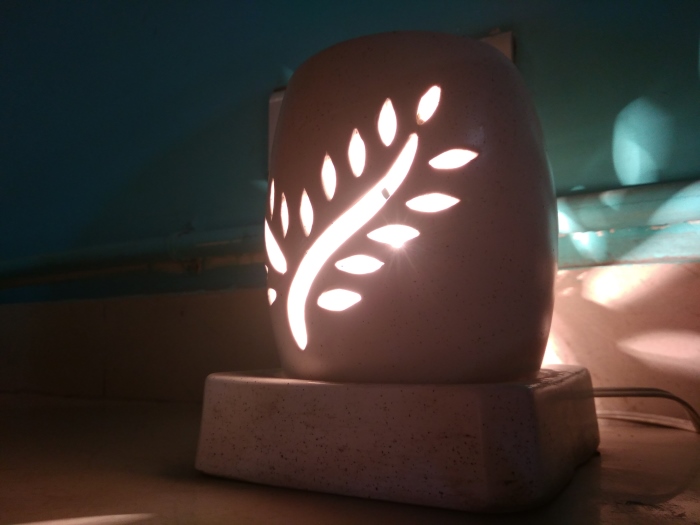 As for the selfie camera, the performance is decent enough. Overall, the images are generally soft, and there are signs of the image being slightly washed out. The camera features a beautification mode by default which makes faces look extremely artificial. 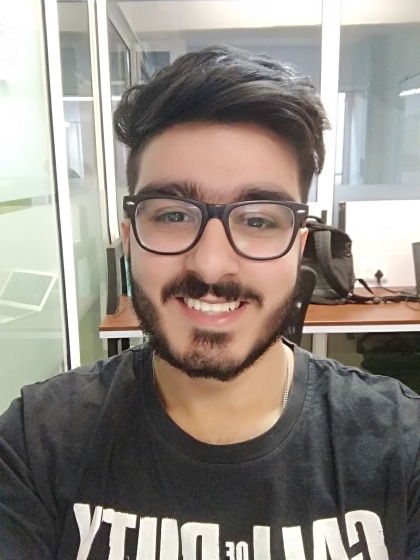 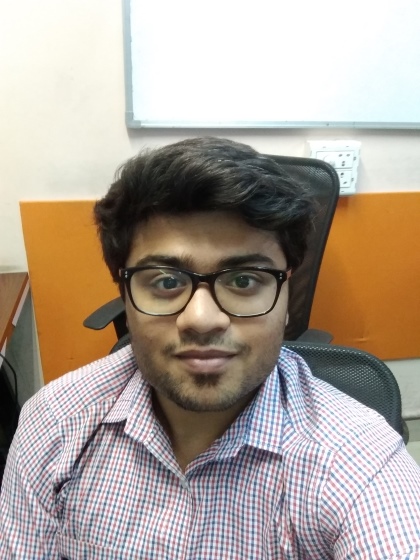 All in all, the camera department is a big letdown and is the definitely the biggest con of the device.

Connectivity is a strong point of the device and one that I really admire about the Redmi 5A. Sure, the device still sports a microUSB port, but to be honest, I’m fine with it, especially considering the price point. The Redmi 5A comes equipped with the 3.5mm jack, which is a pleasure to see. 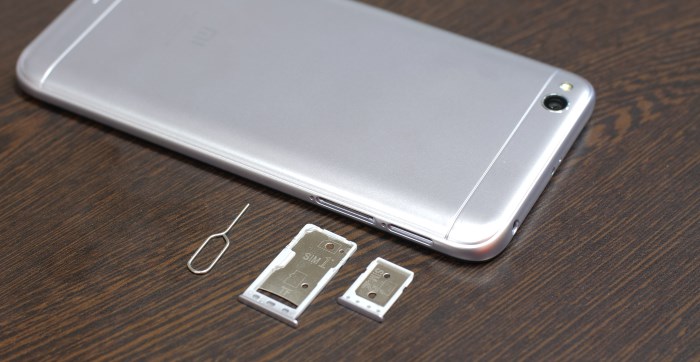 But what I really admire about the Redmi 5A is the fact that in a market populated by hybrid SIM slots, Xiaomi has gone old school and included 2 dedicated SIM slots along with a dedicated microSD card slot. Personally, that is a great addition and leaves barely any room for complaints.

The Redmi 5A packs in a huge 3000mAh battery and is coupled with the power efficient Snapdragon 425 along with a 5-inch HD display. As you can see, the hardware is not that demanding, and the battery capacity is quite big.

In my testing period of the device, the device never let me down. It easily lasted for about two days on medium usage which included checking emails, communicating with my team over Quip, making the occasional calls home that I’ll be getting late, lots of Twitter and Instagram, and finally, playing a bit of 8 Ball Pool. Also, MIUI’s background app optimization works really well, and never did I see myself running around for a charger to replenish the device’s juice. 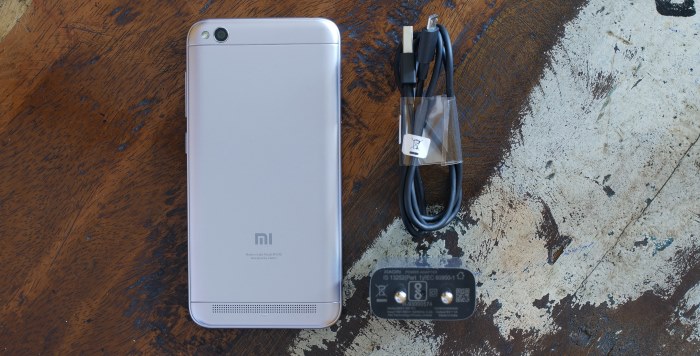 However, when it comes to charging, do note that the device features no fast charging option. The bundled 5V/1A charger takes about 2 hours to completely charge the humongous battery. Nonetheless, the great battery backup means you can simply charge the device at the end of the day, and use it comfortably for the next two days.

Xiaomi is known for producing great budget-friendly devices, and the Redmi 5A is another example of that. The Redmi 5A is also one of the first devices that is completely made in India, and thanks to the program, Xiaomi has been able to bundle a lot of great hardware into the device while keeping the price down. If the average camera quality is something that you can live with and you’re looking for a decent budget performer, the Redmi 5A is an easy recommendation. Also, unless you’re really into multitasking, the 2GB/16GB variant should more or less be quite sufficient for you, since you get almost the same performance, and you can always increase your storage up to 128GB with a microSD card. 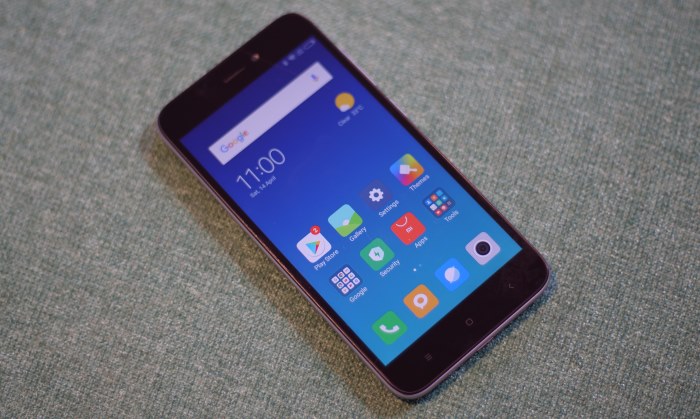 The Redmi 5A is a great device that packs in decent hardware and offers decent performance all round. The camera quality might be a deal breaker for some, but other than that, Xiaomi has once again shown why they are the best when it comes to budget smartphones. The Redmi 5A delivers everything that you expect from an ideal mid-ranger. Apart from the average camera, the device has managed to check all the boxes.