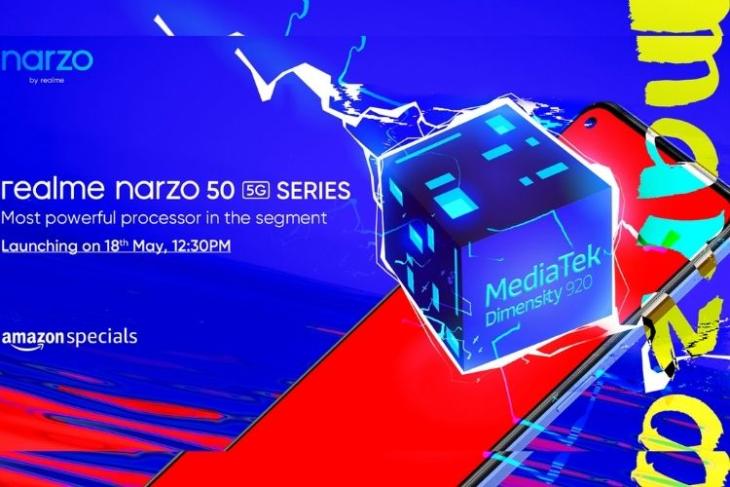 The Narzo 50 5G series will launch in India on May 18 at 12:30 pm via an online event. As usual, this will be live-streamed via the company’s YouTube channel and real-time updates can be accessed via Realme’s Twitter and Facebook handles.

It is also revealed that the Narzo 50 Pro 5G will be powered by the MediaTek Dimensity 920 chipset. That said, processor details regarding the vanilla model remain unknown. But, it could possibly include the Dimensity 810 chipset.

As for the other specs, not much is known as of now. However, a recent leak suggested that the upcoming Narzo 50 5G will feature a 6.58-inch AMOLED display with support for a 90Hz refresh rate, a 4,800mAh battery with 33W fast charging, and may have dual rear cameras. The Narzo 50 Pro could come with 48MP triple rear cameras. The design of both phones is expected to be like that of the Realme GT 2. The phones are expected to run Android 12 with Realme UI 3.0 on top.

The Narzo 50 5G series is also confirmed to come with “other segment-first features” and some details are expected to surface prior to the launch. Hence, it’s best to wait and watch to get more details on this. We will keep you posted on these details. So, make sure to circle back to our website next week.