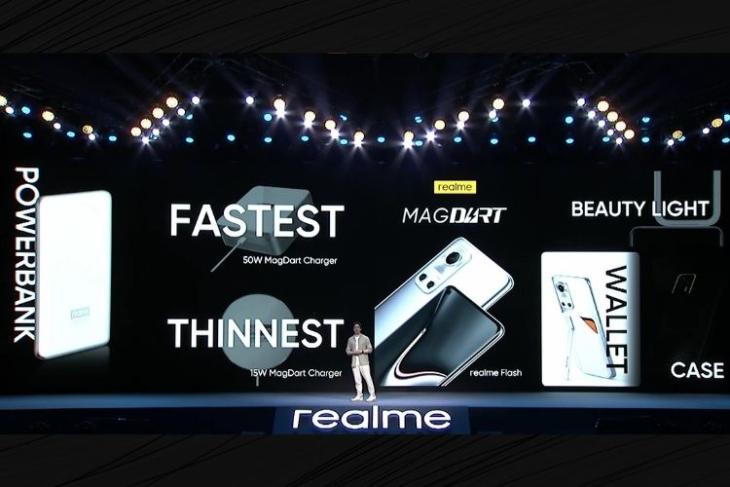 Following a bunch of reports and teasers, Realme finally unveiled its Apple MagSafe-like magnetic wireless charging system for smartphones – MagDart. The Chinese giant today showed off the world’s fastest magnetic charging solution, capable of delivering charging speeds of up to 50W. So, let’s take a quick look at the MagDart charging system and the various accessories that Realme announced today.

Let’s start off with the world’s first Android phone with support for Realme’s MagDart wireless charging system. Realme Flash is a concept phone developed by the Chinese giant to test and demonstrate the MagDart charging system.

#realmeFlash is the First Concept Phone of #realme, developed specifically for the #MagDart wireless charging solution. Featuring a Flagship level dual-cell 4500mAh Battery, it is all-set to go #MagForFuture.

Although the company did not reveal much about the device, the Realme Flash features a curved display, a dual-curved back panel with an AG matte coating, and a 0.3mm magnetic charging coil underneath the panel. Under the hood, the device packs the Snapdragon 888 chipset and a 4,500mAh battery with support for up to 50W fast charging.

Turning to the first MagDart accessory, the 50W MagDart Charger, as per the company, is the most compact and the most powerful magnetic charger in the industry.

As per Realme, the 50W MagDart Charger can charge the dual-cell 4,500mAh battery of the Realme Flash from 0% to 20% in just 5 minutes. Hence, it shows that the MagDart wireless charging solution is as fast as wired charging.

Alongside the 50W charger, Realme also introduced an ultra-thin 15W MagDart Charger that aims to compete with Apple’s 15W MagSafe chargers. It is only 3.9mm thick and lighter than Apple’s offering, as per Realme Product Marketing Manager Alessio Bradde.

Realme has also introduced a slim and portable MagDart Power Bank that looks pretty similar to the recently launched Apple Battery Pack. It has a dual-cell battery onboard and weighs around 139g, making it a pocketable device. MagDart power bank could be a good alternative to Apple MagSafe Battery Pack. 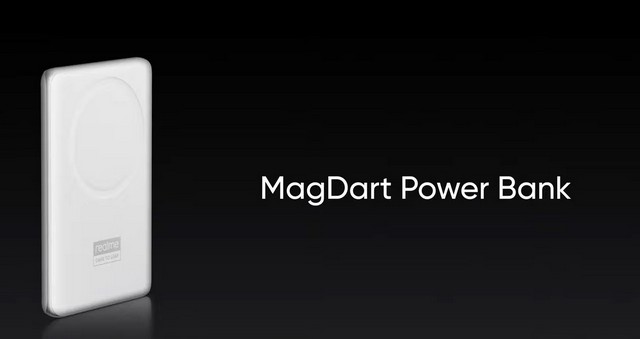 There is also a charging stand that goes along with the MagDart Power Bank. It has a USB-C connector to which users can connect the power bank to get a premium-looking wireless charging stand for Realme smartphones.

The device attaches to a MagDart-enabled device magnetically and works with the help of reverse wireless charging. Moreover, the MagDart Beauty Light can be flipped over to the front while taking selfies.

Furthermore, the MagDart Wallet also features an aluminum kickstand to enable users to prop the phone vertically on a flat surface. It is made of a hard-wearing white vegan leather material and looks pretty clean.

Now, as a surprise for Realme GT owners, the company introduced a MagDart Case that is specially designed for Realme GT. It is a pretty nifty accessory that adds MagDart support to Realme GT, which currently does not have MagDart-compatible hardware.

We could see this case being launched in India at the Realme GT event on 18 August later this month.

As for availability, the company did not provide any specific timeline for the launch of MagDart products. Moreover, there is no information about the prices. However, as Realme has already announced the MagDart accessories, we can expect the company to soon release a MagDart-compatible phone in the market.