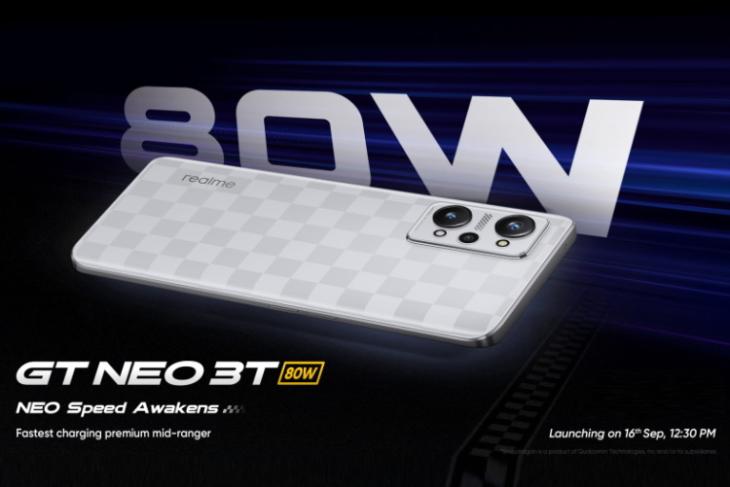 Realme launched the GT Neo 3 with a MediaTek chipset and 150W fast charging in India in April earlier this year. And now, the company is gearing up to launch the Realme GT Neo 3T, which was released globally in June, in India next week. This premium mid-ranger comes with a 120Hz display, a 64MP triple camera system, fast charging, and more. Let’s look at the release date and specs of this smartphone:

After teasing the device on social media over the past couple of days, the company today took to its official Twitter handle to announce that Realme GT Neo 3T will launch on September 16 at 12:30 PM in India. The tweet also has a teaser image, which shows off the checkered pattern on the rear, triple cameras, and 80W fast-charging. Check out the tweet right here:

The tweet also includes the link to a dedicated microsite for the Realme GT Neo 3T, which reveals that you can charge the 5,000mAh battery up to 50% in 12 minutes using the 80W fast charger. We also learn that the device will be powered by the Snapdragon 870 chipset, which we already knew from the global launch.

We already know all the other specifications of this smartphone as well. GT Neo 3T packs a 6.62-inch Full HD+ Samsung E4 AMOLED display with a 120Hz refresh rate and a 360Hz touch sampling rate. The panel also supports HDR10+, up to 1300 nits of peak brightness, and more. There’s a 16MP punch-hole selfie camera on the front here.

Under the hood, the Snapdragon 870 SoC is paired with 8GB of RAM and up to 256GB of storage. The device also supports 5G, Wi-Fi 6, and Bluetooth 5.2 As for the rear cameras, you have a 64MP primary sensor, an 8MP ultra-wide camera, and 2MP macro camera. It supports stereo speakers, Dolby Atmos, and more features.

So yeah, are you excited for the launch of the Realme GT Neo 3T in India? Let us know in the comments below.