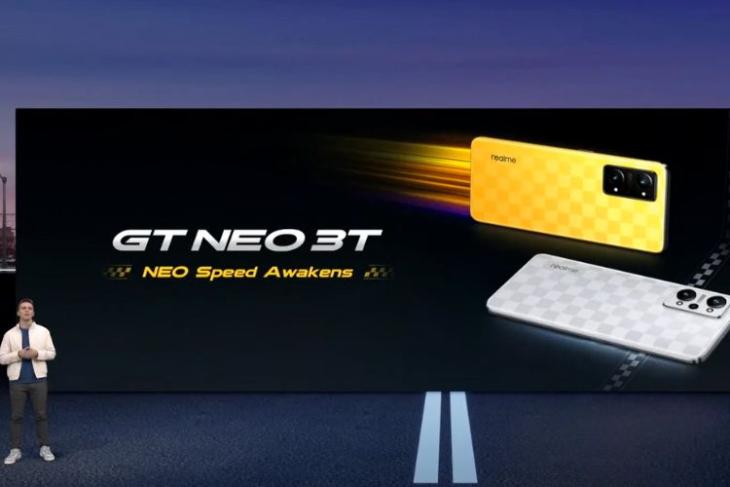 Realme has added another member to its GT Neo 3 series called the Realme GT Neo 3T. The smartphone has been launched globally along with the Realme GT Neo 3, which was only available in China and India. The GT Neo 3T is essentially a rebranded version of the Realme Q5 Pro, which is exclusive to China. Here are the details.

The Realme GT Neo 3 looks similar to the Q5 Pro with a checkered print at the back painted in yellow. It also comes in Drifting White and Shade Black colorways. The front part has a 6.62-inch Full HD+ Samsung E4 display with a cornered-placed punch-hole. This display supports a 120Hz refresh rate, HDR10+, a 360Hz touch sampling rate, up to 1300 nits of peak brightness, and more.

There’s a Snapdragon 870 chipset, paired with 8GB of RAM and up to 256GB of storage. For the photography, the GT Neo 3T includes a 64MP main camera, an 8MP ultra-wide lens, and a 2MP macro camera. It also features a 16MP selfie shooter.

The device is backed by a 4,500mAh battery with 80W fast charging. To recall, it was previously expected to come with 150W fast charging but that remains reserved for the Realme GT Neo 3.

The Realme GT Neo 3, on the other hand, comes with the same MediaTek Dimensity 8100 SoC, a 120Hz display, 50MP triple rear cameras, 80W and 150W fast charging options, and more.

There’s no word on its availability in India but we can expect it to happen soon.