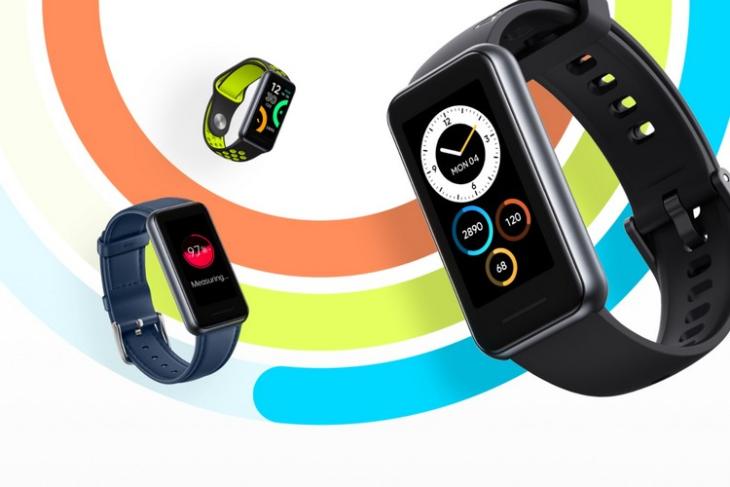 As promised, Realme has unveiled its next-gen fitness-focused wearable, the Realme Band 2, in Malaysia today. This smart wearable comes in a brand new form factor and has a larger display than the first-gen Realme Band from last year. Now, before moving on to the price and availability, let’s take a quick look at the key specs and features of the Realme Band 2.

Now, starting with the design, the Realme Band 2 looks pretty different from the Realme Band. It brings an unexpected but good design change. It comes with a rectangular chassis and looks much like the Huawei Band 6 that was launched earlier this year.

The Realme Band 2 also boasts a 1.4-inch TFT LCD panel, which is significantly larger than the 0.96-inch screen of the first-gen model. It is a color screen, like the one on the Realme Band, and supports touch input. You will need to rely on the function button at the bottom of the display to use the fitness band. The panel here has a 167 x 320p resolution and can reach a peak brightness of up to 500 nits. Moreover, the users can choose from up to 50 personalized watch faces to match their styles.

Turning to the health-focused features, the Realme Band 2 comes with 90 built-in workout modes. It includes running, walking, cycling, hiking, yoga, and many more. This is a major upgrade as the first-gen Realme Band only supported 9 built-in workout modes. Plus, the device comes with a heart rate monitoring sensor and SpO2 sensor to track the heart rate and blood oxygen levels of users. Moreover, the device supports sleep tracking to give a detailed report via the companion app.

As for the battery, the Realme Band 2 packs a significantly larger 204mAh battery than its predecessor. As per the company, the device can deliver up to 12 days of battery life on a single charge. Also, you no longer need to remove the strap to charge the fitness band. You now get a magnetic charger in the box, and it attaches to the bottom of the band with ease.

Other than these, the Realme Band 2 also works as a remote control for various AIoT devices, such as smart bulbs, smart plugs, and more. Moreover, it is water-resistant up to 50 meters and comes with an 18mm interchangeable wrist strap.

Coming to the price, the Realme Band 2 has been launched in Malaysia at a pre-sale price of RM 139, which translates to Rs. 2,500 in Indian currency. However, the actual MRP of the device is RM 169 (~Rs. 3,000), as reported yesterday. It is currently available to buy exclusively from Lazada in Malaysia and is expected to launch in India next month. Stay tuned for more information.

Realme Band 2 to Launch in Malaysia Tomorrow; Official Price Leaks Ahead of Launch