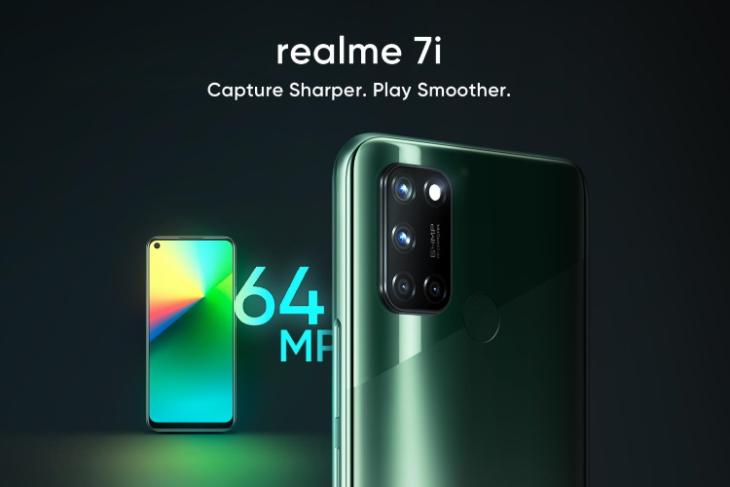 The Realme IoT event saw the company debut a new budget smartphone, the Realme 7i, in India today. The smartphone was first unveiled in Indonesia nearly three weeks ago and has quickly made its way to the country. Realme 7i is the latest addition to the popular number series and comes equipped with a 90Hz display, 64MP quad-camera, a huge 5,000mAh battery, and more.

The device features a dual-tone finish, along with a rectangular camera cut-out and a physical fingerprint sensor, on the rear. You will find a 6.5-inch HD+ LCD display with a 90Hz refresh rate. The panel boasts a 20:9 aspect ratio and 1600 x 720-pixels resolution. Let’s not skip out on the punch-hole cutout, which houses a 16MP selfie sensor, at the top left.

Under the hood, the budget-centric Snapdragon 662 chipset powers the Realme 7i. You will also find 8GB of RAM and 128GB of built-in storage, expandable up to 256GB via a dedicated microSD card slot. The device runs Android 10-based Realme UI out-of-the-box, which is a little disappointing as Android 11-based Realme UI 2.0 has already been unveiled.

The quad-camera array on the rear is backed by a 64MP primary camera, alongside an 8MP ultra-wide camera with 119-degree FOV, a 2MP macro lens, and a 2MP depth sensor to round up the kitty. You get all of the camera features, including UIS video stabilization, ultra-wide video, Nightscape mode, and new night filters aboard the Realme 7i.

Realme 7i also comes equipped with a huge 5,000mAh battery with 18W fast-charging support via the USB Type-C port at the bottom. You also get a 3.5mm headphone jack, Wi-Fi 802.11ac, Bluetooth 5.0, and GPS in terms of connectivity options onboard.