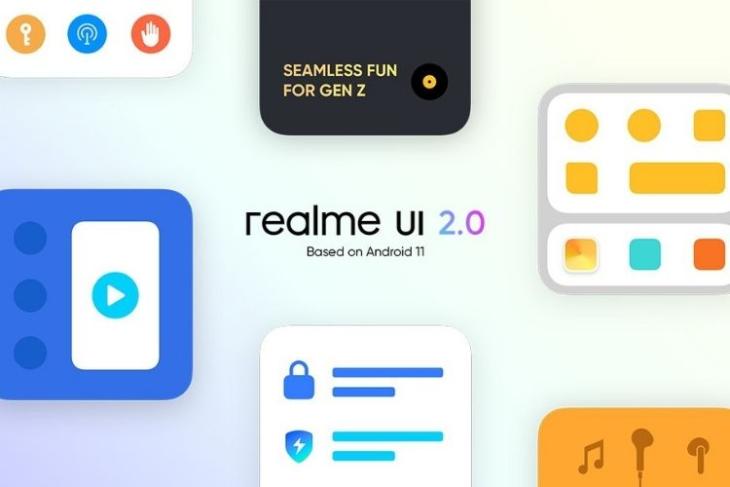 Alongside the Narzo 20 series, Realme has officially taken the wraps off Realme UI 2.0 based on Android 11 at the virtual event in India today. This second-gen software skin looks really similar to the recently unveiled ColorOS 11 skin for Oppo phones. It brings along UI/ UX improvements, new privacy features, and digital health features.

While most of the UI elements remains unchanged in Realme UI 2.0, the company has decided to now offer a global theme color feature. It offers you 5 color schemes and 10 solid colors to help customize the color of the main interface, icons, toggles, and more.

For the vibrant millennials, we have built-in 5 colour palettes, in warm and cool shades with their own unique style. You can now customize the main interface, notification bar, shortcut button and 24 other interfaces using the Global Theme Colour function in the #realmeUI 2.0. pic.twitter.com/4Mhg6kQYTl

There’s also an improved and customizable dark mode feature in tow here. You’re now free to choose from among 3 types of dark themes — enhanced (pure black), medium, and gentle (light gray). Realme UI 2.0 can auto-adjust the dark theme contrast based on the ambient light, if that’s something that you prefer.

The new Dark Mode update in #realmeUI 2.0 offers 3 styles to cater to everyone’s needs: Enhanced, Medium & Gentle. It also supports intelligent auto-adjustment which automatically adjusts the contrast according to the ambient light.

Just like in ColorOS 11, you now have a stock Android-like notifications panel and the option to use custom icon styles with ease.

Realme UI 2.0 lets you choose from among five different Always-on Display designs. It offers a digital or analog clock, text and image, text-only, and custom patterns with its next-gen skin. The company has also ported ColorOS 11’s best feature — customizable Always-on Display. You can sketch/ design your own patterns for the AOD, as you can see in the tweet below.

In an unprecedented upgrade, the Always On Display function in the #realmeUI 2.0 offers 5 themes and is also the first customization engine in the market which allows you to create unique AOD patterns with just a touch of your finger. pic.twitter.com/L73ffODQth

Realme UI 2.0 comes baked with Digital Well-being features that you will find in stock Android phones. The company has, however, topped it off with its own ‘Sleep Capsule’ feature to help keep track of your sleep cycle. The feature has not been described in detail but it seems to allow only certain apps during downtime and limited chances to lift the downtime to use the device.

If you’re someone who loves to multi-task on their phones, then the Floating Window feature is made just for you. It seems to be inspired from MIUI 12’s floating window feature and lets you open a certain app in either a small or mini windows (like we saw in ColorOS 11) over other apps. This will enable you to access the calculator, videos, and other similar stuff while penning notes or sending out tweets during a live event.

The Floating Window function in the #realmeUI 2.0 offers new possibilities. Now you can chat with your friends and watch videos simultaneously. pic.twitter.com/UpsfsWdL98

Realme UI 1.0 was based on ColorOS 7 and it brought along some impressive privacy features, including private space and personal information protection. Realme UI 2.0 builds upon the same while also offering you one-time app permission, auto-rest, and other stock Android 11 privacy options. There’s also new harassment call blocking and psuedo site blocking features in tow as well this time around.

Introducing the Deep Sea Privacy Plan, the #realmeUI 2.0 features an Invisible Door, Private Space and a Security Shield so that you can share your creativity without worrying about the safety of your personal data and privacy. pic.twitter.com/6Kyry8rYIN

In addition, the company mentions that it has improved frame rate speed and system stability by up to 17% and 32% respectively for Realme UI 2.0 users. It also brings in tow new subtitle stitching and Dual Mode Music Share feature to let the users enjoy their favorite content the way they like – accessible with subtitles or with friends.

Realme UI 2.0 will first roll out to Realme X50 Pro users in ‘Early Access’ (or a closed beta) starting 24th September. The company aims to test the new features and roll out an open beta next month, followed by a stable release in November last this year.