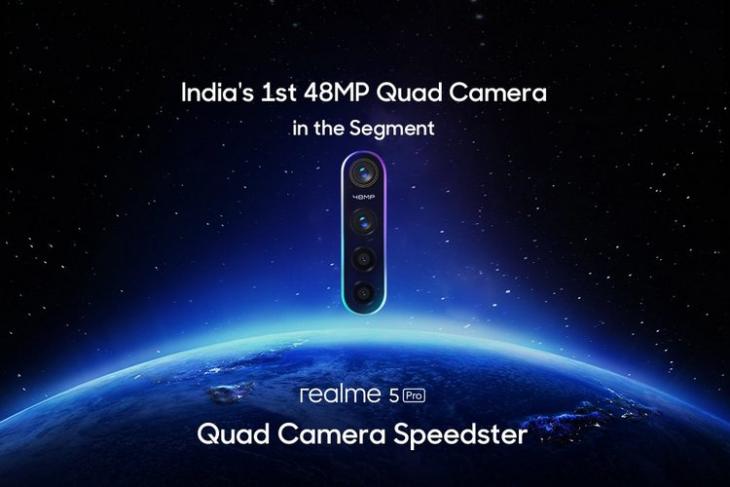 Realme has confirmed that its next mid-range smartphones will be officially unveiled in India next week. In a couple of tweets earlier today, the company said that both the Realme 5 and Realme 5 Pro will be launched in the country on August 20 at 12:30PM. Both will be available exclusively on Flipkart, which has already put up a microsite teasing some of the confirmed features of the upcoming devices, like the quad-cam setups, led by a 48MP sensor in the 5 Pro.

While Realme has officially confirmed some of the important features of the upcoming devices, most of their key tech specs remain under the wraps for now. However, recent leaks and rumors may have possibly revealed some of the key details, including the identity of the 48MP sensor in the Realme 5 Pro. According to tipster Sudhanshu Ambhore (@Sudhanshu1414), the primary sensor will be Sony’s IMX586, while other key hardware components will include the Snapdragon 712 SoC, a notched AMOLED display and an in-display fingerprint scanner.

It’s worth noting here that both the Realme 5 and 5 Pro have been confirmed to launch next week, and not just the ‘Pro’ model, as is being reported by some media outlets. The company made that amply clear through a follow-up tweet (as seen below), as well as on Flipkart, which clearly mentions ‘Realme 5-series’ rather than just Realme 5 Pro.

The Realme 5 and 5 Pro are part of the company’s stated plans to launch at least one quad-camera phone in all three of its lineups – Realme, Realme Pro and Realme X. While the flagship device will ship with Samsung’s 64MP ISOCELL Bright GW1 sensor as its primary camera, the others are expected to ship with relatively smaller sensors.