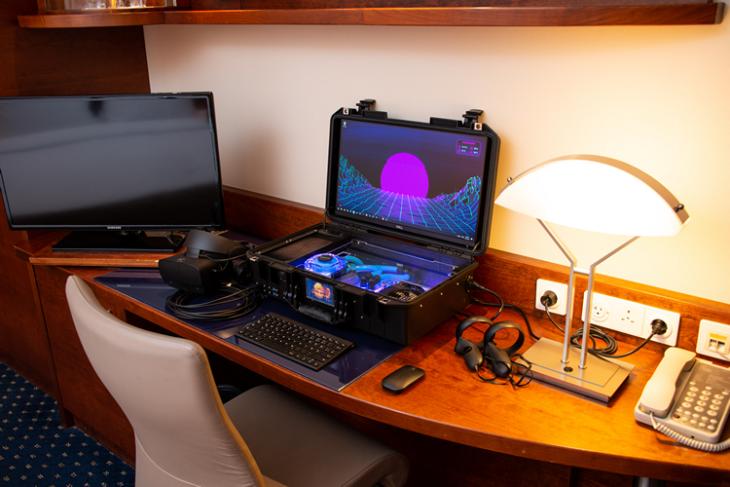 Gaming laptops have always been terrible when it comes to thermal performance, especially in the entry-level segment. A gamer on Reddit couldn’t put up with this and built a portable gaming rig for personal use.

The gaming setup is codenamed Nuclear Football PC and it is basically a Pelican briefcase with all the components fitted into it, including the display. The setup features an AMD Ryzen 5 2600 processor, a NVIDIA 2070 Super FE, 16GB RAM, and a dedicated cooling system.  Quite impressive, isn’t it?

Here’s how the Redditor picked the monitor for the gaming rig: “The Pelican 1525 case fits a 23” monitor perfectly. I say “a” monitor as from the 45 I researched I found 4 with low profile bezels and buttons that are not on the base which would have fitted into the case. Out of those 4, the Dell P2319H was the only monitor with a beveled bottom edge and buttons accessible from the front.”

Even though this setup is meant to be portable, don’t expect it to be light. It weighs a whopping 12.1 kilograms. To put that it in perspective, Asus’ ROG Mothership weighs just 4.8kg.

“The case top increases water temperature by 2C but reduces VRM temperature by 4C as it forces more air to flow through the case. The only forced air in the case comes from Noctua fans.”, says the redditor.

Take a look at the complete specifications below.

In case you’re interested to replicate the setup, you can buy the case here. You may comment on this post if you have any queries regarding this setup. So, what are your thoughts on Nuclear Football PC? Tell us in the comments.