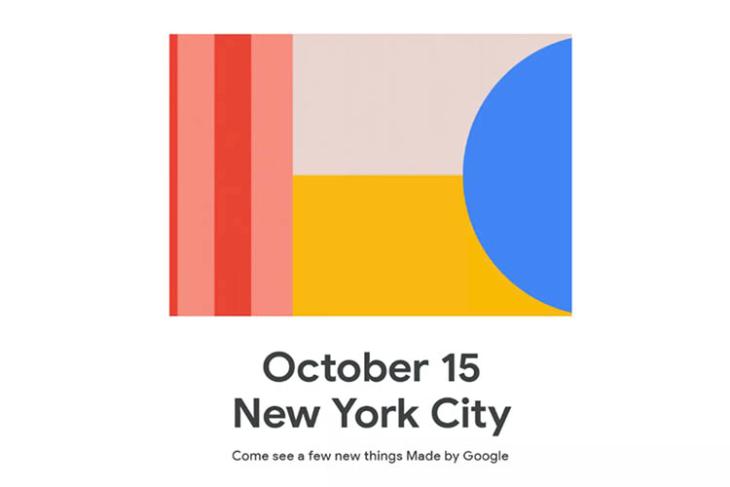 The Pixel 4 and Pixel 4 XL have seen more than their fair share of leaks with almost everything about the devices having been leaked by now (including a possible 5G variant of the Pixel 4 XL). Well, the leaks will probably not stop any time soon, but Google has finally given us a confirmed date for when the company will launch the new smartphones.

The Mountain View giant has sent out media invites for an event it will be holding on October 15 in New York City, where, as the invite says, it will show off a “few new things Made by Google”.

Among those things are obviously the new Pixel smartphones, which will come with the latest Snapdragon processor, 6GB (hopefully) of RAM, and a dual camera set-up as well. Plus there’s going to be Face ID like 3D facial unlock, along with motion gestures with the company’s Soli radar chip. The Face ID and Motion Gestures have been confirmed by Google itself, and the rest of the information we have about the upcoming phones is based on leaks and rumours surrounding the devices.

Google will also launch a host of other hardware at the event though, as can be surmised from the “few new things Made by Google” line written on the invite. We’re expecting the company to launch a new Pixelbook, and most likely new Google Home speakers. There will be no upgraded Pixel Slate though, because Google has pulled out of the tablet hardware business after the really poor response the Pixel Slate received from reviewers across the board.

Either way, the Pixel 4 event is finally confirmed now, so mark your calendars for October 15, and let’s see what else Google has cooked up for us; unless those things get leaked too. As for the Pixel, well, the phone just can’t catch a break.

Marred by Leaks, Google’s Pixel 3 Launch Seemed like an Under-Sell