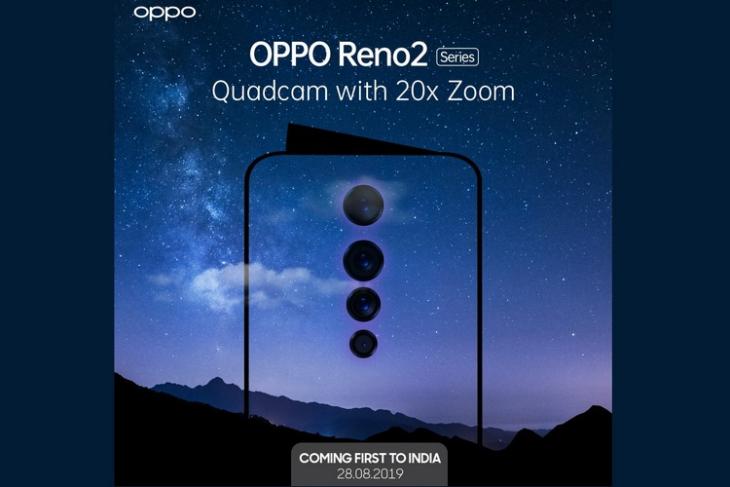 Barely months after launching the first-generation Oppo Reno smartphone with 10x zoom, the Chinese smartphone company is all set to launch its successor with even more telephoto power. The company on Friday started sending out press invites for its ‘Oppo Reno 2-series’ smartphones that will launch August 28 with a quad-cam setup and 20x zoom.

As can be seen from the invite, the devices will apparently be launched first in India, but there’s no further info apart from the confirmation that they will also have a Shark Fin selfie camera module like their predecessor and, sport a vertically-stacked camera setup on the back. The only other thing that one can deduce from the invite is that the company will likely launch multiple devices in the lineup, given how the it clearly mentions ‘Reno 2 Series’ instead of just ‘Reno 2’.

While Oppo is yet to officially confirm any of the key tech specs, recent rumors have suggested that the Reno 2 might be powered by Qualcomm’s Snapdragon 700 series processors, although the exact chip is yet to be identified. The device is also said to come with a 6.43-inch AMOLED full-screen display, a 4,065mAh battery with VOOC fast charging support and an in-display fingerprint scanner.

As for the cameras, reports suggest that it might feature a 48MP f/1.7 primary snapper, accompanied by an 8MP secondary sensor paired with ultra-wide lens, a 13MP telephoto camera and a 2MP monochrome sensor. The phone is also rumored to be priced higher than its predecessor, although, the standard model, with lower specifications, might be priced more affordably.