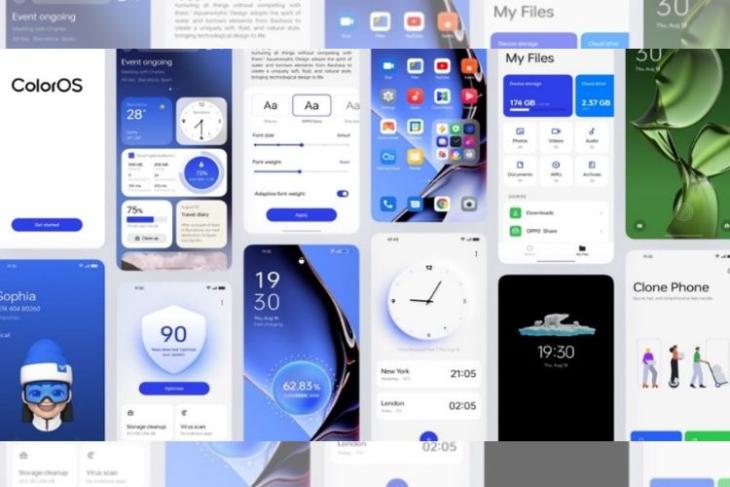 Oppo has finally introduced the next iteration of its operating system called ColorOS 13 globally. The new version of Oppo’s skin is based on Android 13, which recently started rolling out to the Pixel devices as a stable update. ColorOS 13 brings the new Aquamorphic Design and new features to the table. Have a look at the details.

Primarily, ColorOS 13 introduces the new Aquamorphic Design, which has color themes “inspired by the changing color of light between sunrise and sunset at sea level.” The UI also includes new system font for improved readability, easily recognizable icons, and elements like the Card-style layout. There are different Aquamorphic effects incorporated into system animations, UI, and its Quantum Animation Engine.

ColorOS 13 also makes way for the new Dynamic Computing Engine, which is meant to improve the overall performance. It focuses on two fronts: increasing the battery life for managing the working of hardware resources and keeping as many background apps as possible open for easier multitasking.

The new update has also improved the Always-on-Display (AOD) functionality by including food delivery and music apps, including Zomato, Swiggy, Spotify, and more. This is also available on OxygenOS 13, which is more like ColorOS 13 for both share the same source codes.

Plus, there’s a new series of AOD images called Homeland, which shows changing homes of wildlife. It is said that these animations “are based on daily temperature changes that will help users pay attention to climate change and the earth we live on.” Additionally, the AOD refresh rate has been reduced to 1Hz to save battery by up to 30%. Features like Large Folders, Shelf, and Home Screen Widgets are also available to easily manage the home screen.

Another helpful feature is the Multi-Screen Connect, which helps easily connect the Oppo phones with the tablet, and the phones with a PC. Oppo has also introduced the Meeting Assistant, which ensures a more stable network during video calls, simplifies banner notifications, and allows users to add the Oppo Notes shortcut.

There are various privacy and security features too such as Android 13’s clipboard history deletion, the Nearby Wi-Fi feature for access to Wi-Fi without revealing location details, and the Auto Pixelate feature, which will blur the name and photos of people in chat screenshots.

ColorOS 13 based on Android 13 is now available for the Find X5 Pro and Find X5 and will be reaching around 35 devices, in more than 60 countries this year. You can check out Oppo’s ColorOS 13 release schedule below.

Also, don’t forget to share your thoughts about the new ColorOS 13 update in the comments below.