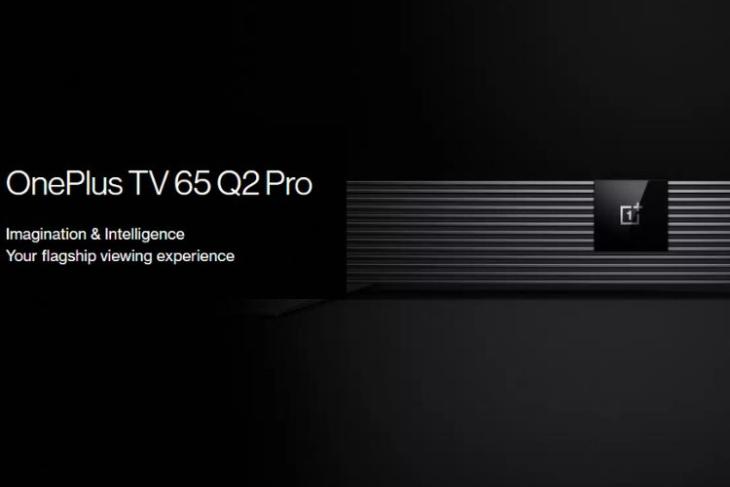 OnePlus will be hosting its ‘Cloud 11’ event on February 7 to launch the flagship OnePlus 11 in India along with a few more products like the Buds Pro 2 TWS and the company’s first mechanical keyboard. Now, it has been confirmed that there will be a new TV too in the form of the new OnePlus TV Q2 Pro. Check out the details below.

OnePlus will launch a new 65-inch Q2 Pro TV as part of its Q series on February 7 at 7:30 pm in India. The company has teased a slight glimpse of the TV, which seems to be carrying a new design as compared to the Q1 series launched back in 2019.

There’s also a dedicated microsite on Amazon. The TV will also be available to buy via Flipkart. Not much is known about the upcoming OnePlus TV 65 Q2 Pro but we expect to get access to premium features. There’s no word on the pricing but it could come under Rs 70,000 or so. More details are expected soon.

As for the other products, it was recently confirmed that the OnePlus Keyboard will also launch on February 7. It will be a mechanical keyboard in collaboration with Keychron. It will be compatible with both Windows and Mac and can be customized too. OnePlus’ first keyboard could be priced at Rs 9,999.

The OnePlus Buds Pro 2 will come with Android 13’s spatial audio, ANC support, up to 39 hours of playback time, Dynaudio tuning, and more. It could retail at Rs 11,999. The OnePlus 11, which was launched in China last month, will bring along Hasselblad cameras, the Snapdragon 8 Gen 2 chipset, a new design, and much more at the rumored starting price of Rs 54,999.

We are expected to get proper details at the February 7 event. So, stay tuned for further information.