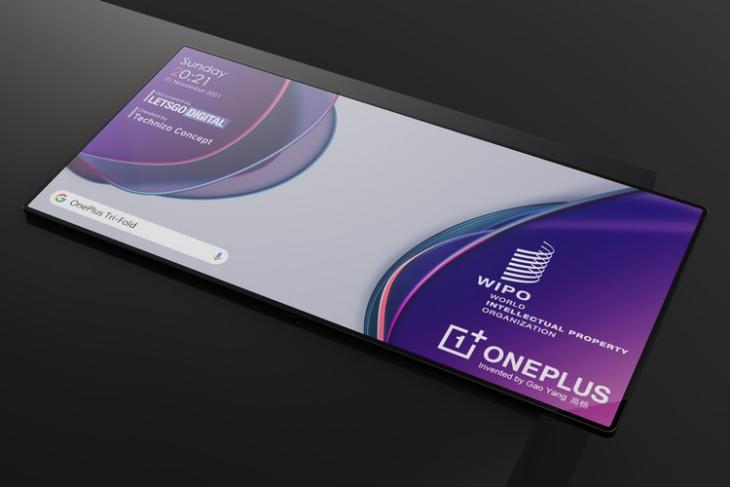 As the foldable smartphone trend continues to gain momentum in the market, several major companies are jumping on the bandwagon to launch their foldable devices. While Samsung is leading the foldable market with its Galaxy Z Fold and Z Flip devices, other companies like Xiaomi, Huawei, and Oppo are looking to come up with their foldable lineup in the coming days. Now, a recent patent has revealed that the Chinese giant OnePlus is also working on a tri-folding device with a dual-hinge design.

The patent, titled “Mobile terminal” was reportedly filed by OnePlus at the end of last year and was published in July this year, as per the Dutch media house LetsGoDigital. The patent was later added to the World Intellectual Property Office (WIPO) database for worldwide protection.

This is one of the first patents for a foldable device coming from OnePlus. It showcases a unique tri-fold design with two separate hinges, much like the TCL’s prototype device from last year, and consists of three display sections. You can check out the patent drawings of the device right below.

Now, to get a better look at the OnePlus foldable phone, LetsGoDigital partnered with concept artist Parvez Khan (aka Technizo Concept) to develop 3D renders of the device. You can check them out in the slideshow below.

As per the renders, the device looks much bigger than current foldable devices in its unfolded form. However, once folded, it becomes a compact smartphone, though a bit thicker than existing foldables.

However, other than these findings, there is no other information about the OnePlus tri-fold device available as of now. Moreover, it is worth mentioning that the device is merely a patent right now. So, we should not expect OnePlus to launch the device anytime soon.

Nonetheless, the existence of the patent shows that OnePlus is not a company that is willing to let go of the opportunities in the foldable market as Google did recently. So, we expect the Chinese giant to continue working on the device and launch it sometime in the future.