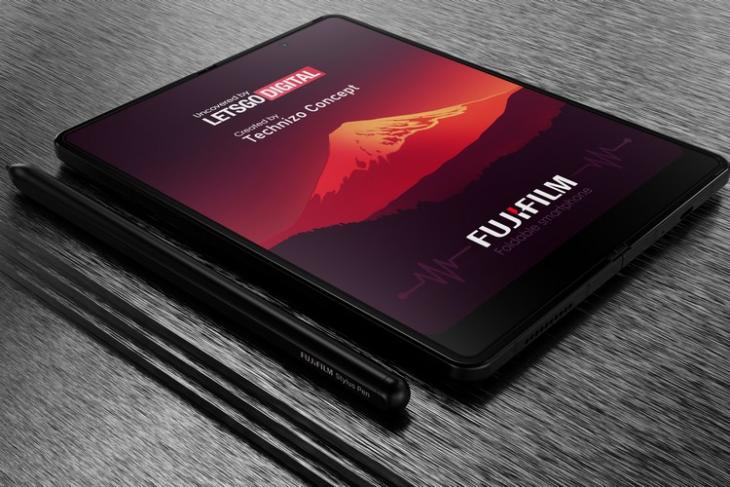 With the growing popularity of foldable devices, various companies are designing their foldable smartphones to capitalize on the hype and demand. Now, a recent patent report suggests that the Japan-based camera giant Fujifilm is also jumping on the bandwagon by designing a foldable smartphone with stylus support.

Initially discovered by the German publication LetsGoDigital, the 51-page patent dubbed “Electronic device and non-transitory computer readable medium” (quite a mouthful!) was recently published. It was also included in the World Intellectual Property Organization (WIPO) database. It details the device’s design and other specs, and contains an array of patent images.

LetsGoDigital and Technizo Concept took the patent images and generated some high-quality renders of the device that show the potential finished product. You can check out a few of them below.

Now, coming to the design, the Fujifilm patent details various aspects of the device, ranging from its processor and touch screen to the speakers, and the microphone. LetsGoDigital reports that the device looks much like Samsung’s latest Galaxy Fold 3, and Fujifilm even mentioned interfaces that will change based on the folding angle of the device. Moreover, the device will also come with Samsung’s App Continuity-like feature.

Although the company went into so much detail about the design of the device, it did not mention anything about the device’s cameras. However, as it is Fujifilm we are talking about, one can expect an advanced camera system.

Moreover, the Fujifilm foldable device will also come with stylus support, much like the Galaxy Fold 3. Plus, the device will be able to fold from 30-degree to up to 135-degree angles. As long as the display remains folded at a 30-degree angle, the outer screen will be turned off to save the battery.

Now, all these sounds pretty redundant now as we have seen many companies integrate various innovative features into foldable devices. For instance, Samsung’s Galaxy Fold 3 comes with an under-display camera (UDC) and IPX6 water resistance, which is pretty cool for a foldable device.

Moreover, Fujifilm has not mentioned anything about its plans to commercialize the design. However, it is currently unclear whether Fujifilm will jump the gun and get in the field to compete with smartphone giants like Samsung and, potentially Google.

So, what do you think about Fujifilm’s foldable device? Will you get one if the company launches the device in the market? Let us know down in the comments below.