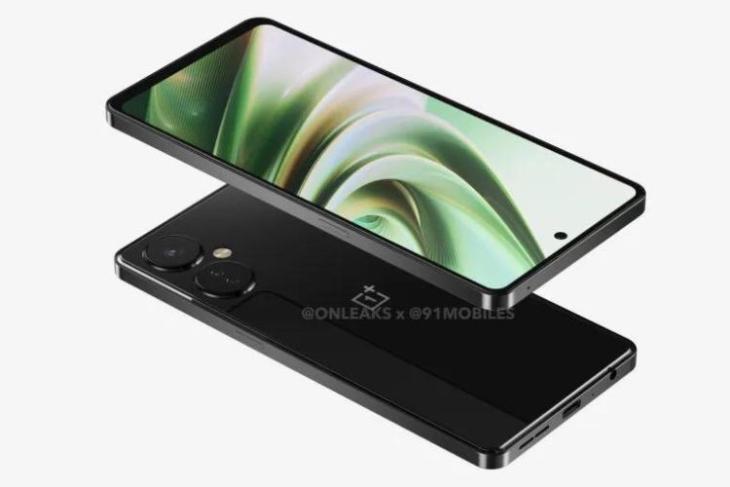 OnePlus might soon launch the new mid-range Nord CE 3 as a successor to the Nord CE 2. The phone’s entire spec sheet was recently leaked and now we have some leaked renders, giving us a look at its possible design. Have a look!

OnLeaks has now partnered with 91Mobiles to show us the OnePlus Nord CE 3. The phone is shown with flat edges, as opposed to the rounded ones seen on most OnePlus phones. This is similar to the OnePlus Nord N20 and even the OnePlus X.

As per the leaked renders, the Nord CE 3 5G has two big camera housings at the back placed vertically. This appears similar to the Realme 10 Pro, which is set to launch in India and other global markets on December 8. The front has a punch hole in the center and a thick bottom bezel. The renders show the phone in black but can expect more color options at the time of launch.

Coming to the spec sheet, the OnePlus Nord CE 3 is rumored to get a 6.7-inch Full HD+ display with a 120Hz refresh rate. This could be an LCD screen instead of an AMOLED one seen on its predecessor. The phone is said to be powered by a Snapdragon 695 chipset, much like the Nord CE 2 Lite. It could come equipped with up to 12GB of RAM and 256GB of storage.

Other details include 108MP triple rear cameras, a 5,000mAh battery with support for 67W fast charging, OxygenOS 13 based on Android 13, and more. It could be priced at under Rs 30,000. As for the launch timeline, not much is known but it could happen in early 2023.

We will let you know when OnePlus releases its plans for the launch. So, stay tuned, and do tell us how you feel about the OnePlus Nord CE 3 design in the comments below.